Ergin Ataman expects EuroLeague to take action after claiming to being verbally harassed and insulted by Fenerbahce fans.

Fenerbahce Beko clinched home-court advantage in the EuroLeague playoffs after beating Anadolu Efes on Thursday. Following the Regular Season Round 24 contest, the visiting team’s head coach Ergin Ataman informed EuroLeague via Twitter that he was verbally harassed and insulted by Fenerbahce fans both at the Ulker Sports and Event Hall and on social media.

The 53-year-old Turk claimed that he was insulted during the match and afterwards on social media platforms and expects EuroLeague to take action. Pending EuroLeague’s response, there might be a sanction for Fener or the Ulker Sports and Event Hall. 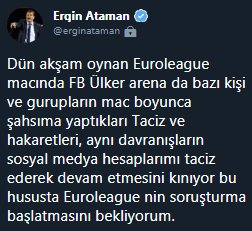