A solid performance down the stretch can certainly make the difference between a win and a loss.

Turkish Airlines EuroLeague presents the Round 18 Stats Review powered by Synergy Sports Technology. The weekly installment looks into the points differential of all in teams in clutch situations, focuses on Regular Season Round 18 and the upcoming double-game week as well.

Per EuroLeague: “The first round of the regular season’s second half saw co-leaders Real Madrid and Anadolu Efes Istanbul consolidate their lead as the latter defeated third-place FC Barcelona away. Here’s a review of the key statistics in the competitive Turkish Airlines EuroLeague landscape coming into the double-round week.

Efes scored an impressive win over Barcelona in the game with the clearest implications at the top of the standings, but the game between LDLC ASVEL Villeurbanne and Crvena Zvezda mts Belgrade to break up the gridlock of four teams with eight wins more than lived up to expectations with its dramatic finish. ASVEL took home a two-point overtime win in a defensive battle in the first matchup between these two teams in Round 8, but Kevin Punter earned a measure of revenge for Zvezda drilling a last-second three-pointer – his second in as many quarters – to close out a clutch road win.

Punter’s jump shot was not the first game-winner to come in the waning seconds of a game this season and it almost surely will not be the last. Though some possessions are far more impactful on wins and losses than others, clutch opportunities are typically defined as any possession used in the last 5 minutes of the fourth quarter or any overtime period when the score is within 5 points. Around 4.9% of all possessions come under those circumstances and they have been converted for a very efficient 0.99 points per possession so far this season – slightly ahead of this year’s 0.98 overall average.” 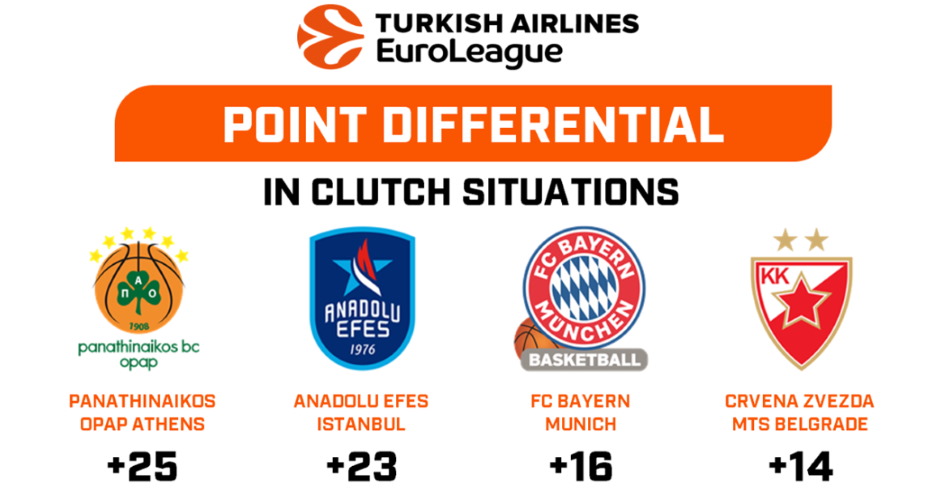 Read the rest of the Round 18 Stats Review on EuroLeague.net.