Frutti Extra Bursaspor Basketball undoubtedly presented one of the biggest fairy-tale stories of the season in European basketball this season, and that story will be told, not just this year, but for years to come

With its modest budget, Bursaspor eliminated the teams that set sail with the goal of crowning as the champions of the EuroCup, one by one, and managed to be considered highly successful even though it lost to Virtus Bologna in the organization, where it eventually reached the finals.

Bursaspor, which had its ups and downs at the beginning of the season, drew all the attention in European basketball by overcoming a huge obstacle and writing the story that is now engraved in our minds.

But… how did all this happen? We asked the heroes of this achievement about the historical success of Bursaspor… 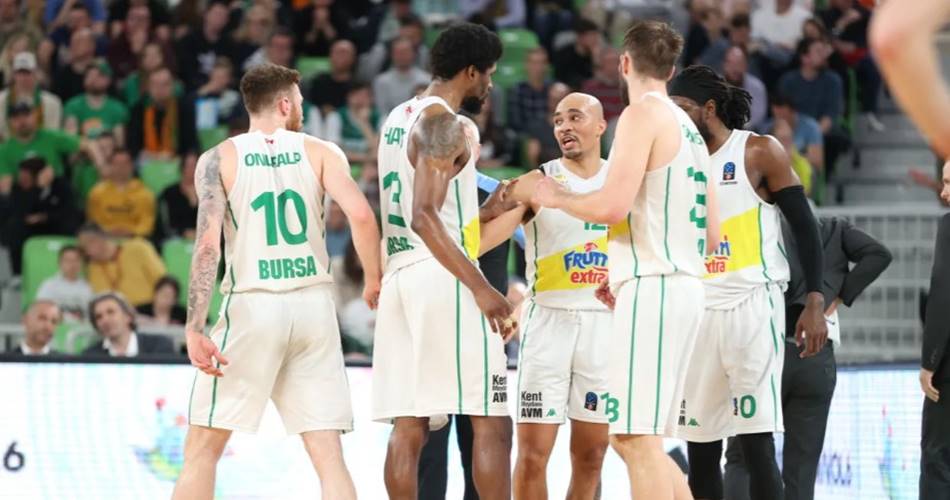 Not only in the beginning of the season; but also even during mid-season, Bursaspor didn’t exactly seem to be a special force, as they turned out to be towards the end. Whatever happened, it happened after the mid-season and the team found its rhythm while marching to the EuroCup final. But how did the players decide sign for a team with a modest budget with not many expectations? Before moving on to the fairy tale of the Bursaspor, we would like to shed light on where it all started…

Dave Dudzinski: “I really enjoyed it in Antwerp, but I had done everything I wanted to do there and was willing to find my way. I had a desire to go elsewhere in the summer. The important thing for me was to go to a bigger league and prove myself elsewhere. In the early summer, Bursaspor made me an offer. I knew they were playing in the EuroCup, they were building something new.”

Derek Needham: “Actually, I was comfortable in Mornar Bar. I was looking for something new. I played in Montenegro for three years and I remember Dusan Alimpijevic coaching at Crvena Zvezda when Bursaspor called me. We had a historic match-up, where we were playing the playoffs for the first time in Mornar history. Also he called me. He remembered me from that time.”

Andrew Andrews: “When I left Türk Telekom, I went home. I wanted to look after my grandmother and be with my family. I got offers from several teams, but Bursaspor was one of the very few teams that gave the contract I had with Türk Telekom before.”

John Holland: “Of course, the situation in Russia is well-known now. EuroLeague also decided that Russian teams would not play, but I had just arrived at that time, and I was preparing to play, but my first game was canceled and I could not play at all. It was a misfortune. Of course, there is a war situation. When my teammates started leaving Russia, I didn’t want to be the last person staying, so I left. I was wondering what my next move would be because I wasn’t sure if I should go back to the US or continue playing here.”

Onuralp Bitim:  “When I left Anadolu Efes, I wanted to go to a place where I could get some minutes and show myself. I chose Karşıyaka. Karşıyaka is both a club I love and a place where I loved the fans and felt loved. İzmir is a place that I can call my home, but now it’s a decision I wouldn’t have made if I went back to that time. It was a mistake for me to go to Karşıyaka. I wasn’t given anything I deserved in Karşıyaka. I have never been able to understand it, nor will I. I know that people in basketball understand everything already. I had a lot of good teammates and experiences. But I definitely got very little of what I deserved.”

Dave Dudzinski: “I think Derek (Needham) had just got on board too. I knew him a bit from the past. It seemed like a good situation for me. I wanted to test myself and see if I could continue my career at the next level, to be honest.”

Derek Needham: “Dusan told me he wanted to do something special this season. He beat me when he was against me. I said, ‘Let’s be on the same side this time.'”

John Holland: “My agent offered me the opportunity from Bursaspor. I had no idea, but I knew they had a chance to advance in the EuroCup playoffs. When I got there, I realized what a really good opportunity it was. You could see how good the team was together. It was already a family atmosphere when I came here. I tried to contribute to that.”

Allerik Freeman: “I already knew Allerik Freeman. Of course, I was very comfortable in Turkey as well. That’s why I thought this would be the most suitable option for me.”

Onuralp Bitim: “A crucial period began for me after Karşıyaka because after a choice I made a mistake, I had to make a choice where I could show myself more confidently, and I sat down with my agent and my family. We talked to coach and Nedim Yücel. This was the right place for me. There were offers from big clubs again, but we believed in a project. At the end of this, not only me, my family, my agent but all the fans understood how good a project it was. My purpose for coming to Bursaspor was that I could show myself in the best way, and besides that, I would be able to show myself in the best way both in Turkey and Europe. It was an opportunity where I could be successful both in Europe and Turkey.”

Dusan Alimpijevic: “We couldn’t win a game for 20 days when I came here. We were dealing with a huge COVID problem when I came. We could only find 6-7 people to do trainings. We couldn’t even play 5v5 in the first month. Despite this, the attitude of the president, GM, board members was always supportive. I even remember this one time when someone from the Frutti Extra came from Istanbul. He told me, ‘Don’t worry, coach, we will build a great future together with you, we already see your contribution.’ He also gave me a Turkish coffee machine as a gift because I’m a coffee maniac.”