Home-court is an advantage every EuroLeague teams hopes to take into account.

Turkish Airlines EuroLeague with a hand from Synergy Sports Technology presents the Round 20 Stats Review. Diving into recent and upcoming action in Europe’s premier competition, the installment lays out the teams with the best differential improvement in home games regarding points per possession.

Per EuroLeague: “Anadolu Efes has taken a two-victory lead over all the other teams after January’s double-round week. Here’s a review of the key statistics in the competitive Turkish Airlines EuroLeague landscape.

Anadolu Efes earned a degree of separation at the top of the standings earning two 20-point wins at home to take a two-win advantage into Round 21. Several teams had a very eventful double-round week to cause a significant shakeup in the standings. CSKA Moscow and Maccabi Tel Aviv both avenged a pair of road losses to postseason-caliber opponents to create a logjam of teams tied for third place with 14 wins. Meanwhile, Valencia Basket continued its rise in the standings by going to Russia to complete season sweeps of Khimki Moscow Region and Zenit St Petersburg and propelling itself towards the top of the very competitive group in the middle of the standings that may only contribute two teams to the postseason. Valencia‘s road wins stand out as those are difficult to come by in the EuroLeague.

Home-court advantage is a very real thing in the EuroLeague. The home team has won 63% of all games this season, with teams in playoff positions winning a remarkable 82% of the time in their own arenas. Digging a layer deeper, only two teams have a better efficiency margin on the road than at home and only Zenit St Petersburg has performed significantly better in opposing arenas this season. The average team is 0.04 points per possession better offensively and defensively at home than they are on the road, making the 0.08 total margin between home and road performance happen on both ends of the floor equally.” 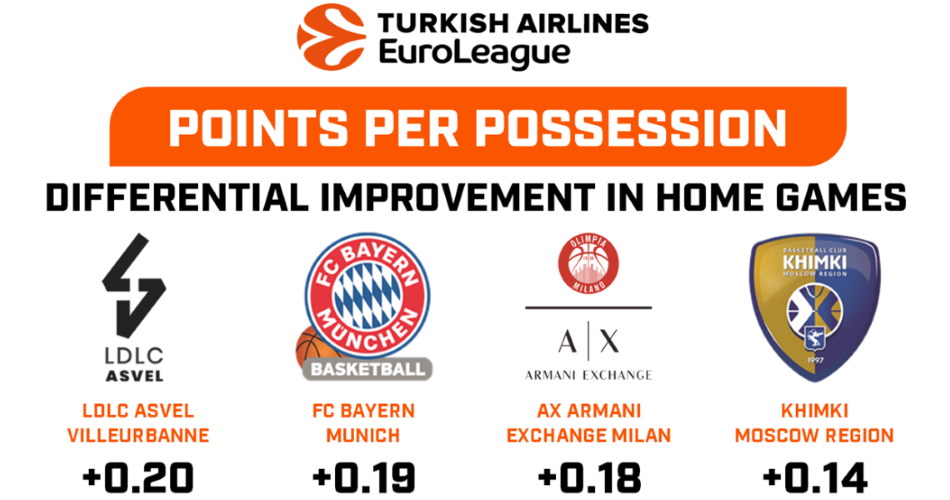 Read the rest of the Round 20 Stats Review on EuroLeague.net.