Jan Vesely is a solid Fantasy option. We already discussed his value a couple of weeks ago. Upon returning from the sidelines costed only 1.38 units. Forward a pair of EuroLeague Regular Season Rounds and he is gaining deserved playing time. We are talking about the reigning MVP.

In four outings since his outing scored ten points three times and added seven more in his fourth game. No scoring shouts here, but stayed on the court over 26 minutes versus AX Armani Exchange Milan and over 33 opposite to ALBA Berlin. Put up 18 points and followed up with 23. Zeljko Obradovic is counting on him.

His current value is set at 1.58 units. So adding him to our squad is a no-brainer. 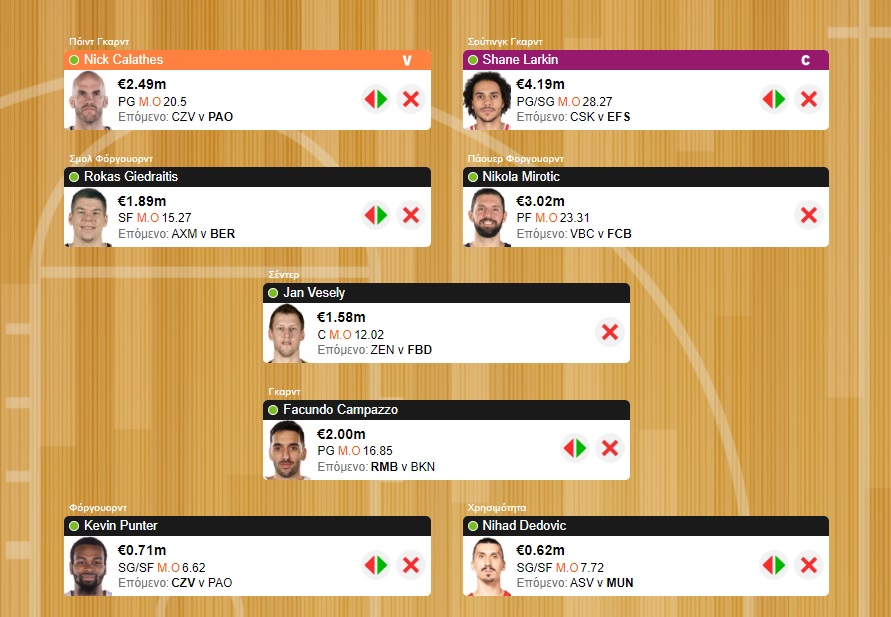 Additional Fantasy tips include former teammates, Kevin Punter and Augustine Rubit. Suggested the Crvena Zvezda mts guard many times, but he is still available at 0.71. His scoring and playing time averages make out Fantasy screamers. Upcoming rival, Panathinaikos OPAP might allow him to try his luck beyond the arc, which can be a treat for Fantasy players entrusting him with a spot in their squad.

With Georgios Printezis out, Rubit can be up for a strong Fantasy performance as well with Olympiacos visiting Zalgiris Kaunas. Last week scored 23 PIR in 32 minutes picking up a large chunk of Sasha Vezenkov’s playing time. He costs 1.08 units and his teammate sits at 0.93, but Georgios Bartzokas will likely rely on him at Lithuania. Our tip, your risk.

Injury-riddled Zenit Saint-Petersburg recently sidelined Alex Renfroe generating an opportunity for Andrew Albicy. He’s been great averaging 19 Fantasy points per appearance in his last three outings and his value is still relatively low at 1.20. The French player is the only healthy solution at the point guard position for the Russian outlet.