Our fantasy tips prior to the bottom end of Turkish Airlines EuroLeague’s latest double-game week.

The second half of the double-game week is upon us with Turkish Airlines EuroLeague Regular Season Round 28 on Thursday and Friday.

We rank Panathinaikos OPAP’s Nick Calathes worthy of our trust and explain. He has a history of solid performances against the Greens’ upcoming foe CSKA Moscow. The first-round affair in Russia saw him produce a season-high 41 PIR. Add on his encouraging current form. He’s also available at an attainable fantasy price. Your roster might need some adjustments to fit him, but we deem them worth the changes.

Another backcourt star we believe worth a similar tactic is Scottie Wilbekin. His value has dropped to 1.90. He is coming off a couple of clutch-filled performances for Maccabi FOX Tel Aviv against Olympiacos and Anadolu Efes. Is that a Fantasy attribute? Well, when Maccabi’s wins improve his Fantasy points tally, then yes.

A couple of additional notes following the returns of Shane Larkin and Bryant Dunston for Anadolu Efes. First off, at this stage of the season, some teams might preserve strength for the playoffs, so top players may not be as productive. Secondly, don’t neglect to check out the injury lists as playing times are directly affected by teammates sidelined. 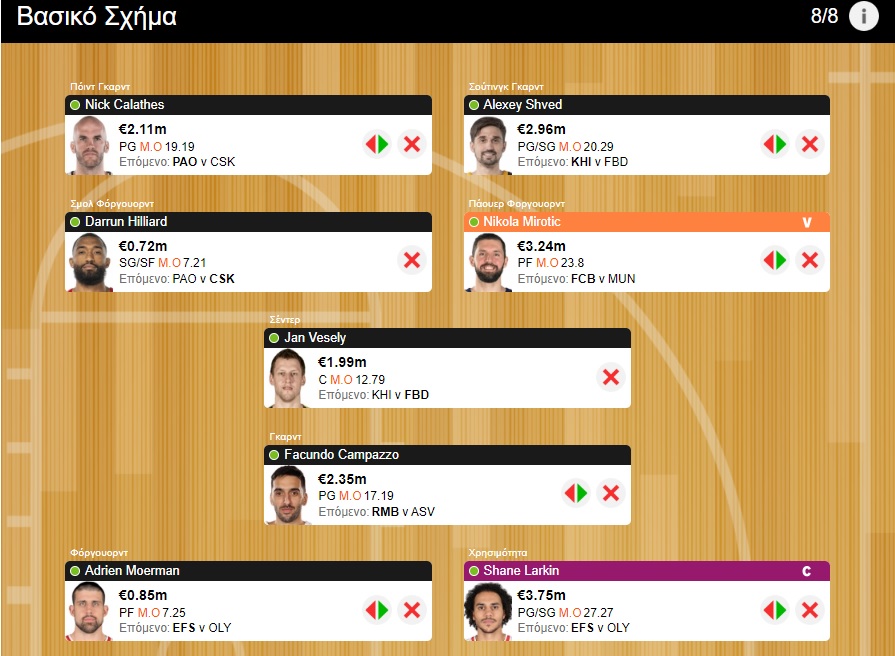 It was tough, but we decided to let Mike James go. It’s impossible to have all the players we want in our Fantasy team. He went through our captaincy role at some point. However, we were forced to remove him from our squad to fit other players. ALBA Berlin’s Niels Giffey returned as one of our picks.

After pointing to his direction in our previous Fantasy installment, labeled Anadolu Efes’ Adrien Moerman as our forward. The French international is a very good player available at the low price-tag of 0.85. His value dropped due to his recent injury. He since has been feeling it and producing stats. Hopefully, head coach Ergin Ataman keeps him on the court over twenty minutes.

The second victim of our adjustments was Crvena Zvezda mts’ Kevin Punter. He fulfilled our expectations as a member of our squad. He was still valued 0.54 when we first included him in our Fantasy tips. Way higher now but still worth his asking price.