Panathinaikos states its intention to stop playing in EuroLeague.

Panathinaikos Athens sent a letter to EuroLeague Basketball and CEO Jordi Bertomeu expressing its intention to leave the competition and asking for a quick launch of the procedures needed to terminate their 10-year contract (signed in November 2015) with the organization and enable the transfer of its license and shares. The letter is signed by Panathinaikos president Manos Papadopoulos.

The full letter, that was published by Panathinaikos on the club’s official website, is as follows:

As you are well aware of, for the past two months, Panathinaikos BC has been timidly and yet explicitly communicating with you, stating its will to terminate the “Licensed  Club contract with EuroLeague Properties S.A and asking for this crucial matter to be referred to the competent bodies the soonest possible. However, your reply that such news would seriously damage EuroLeague Basketball’s negotiations with sponsors as well as the EuroLeague product itself at that time when the pandemic crisis was evolving, led our Club to take into account your concern and choose to act in good faith with the utmost discretion. Neither did we send a formal notice nor did we try to put pressure on you respecting the momentum.

Nevertheless, the time has passed and we have still no response on our reasonable and legitimate abovementioned demand.

As a consequence, in view of the fact that – indicatively – our Club’s presence in the competition has not been proven to be in any way beneficial for us, while at the same time, there has been neither useful exploitation, nor increase in the revenues of the EuroLeague product, Panathinaikos BC hereby in written formally expresses its intention to transfer the Club’s license and shares. We officially request that the competent EuroLeague bodies be promptly and duly convened to proceed with all necessary actions regarding this matter.

Thank you in advance.

We remain at your disposal for any clarification

For Panathinaikos BC OPAP 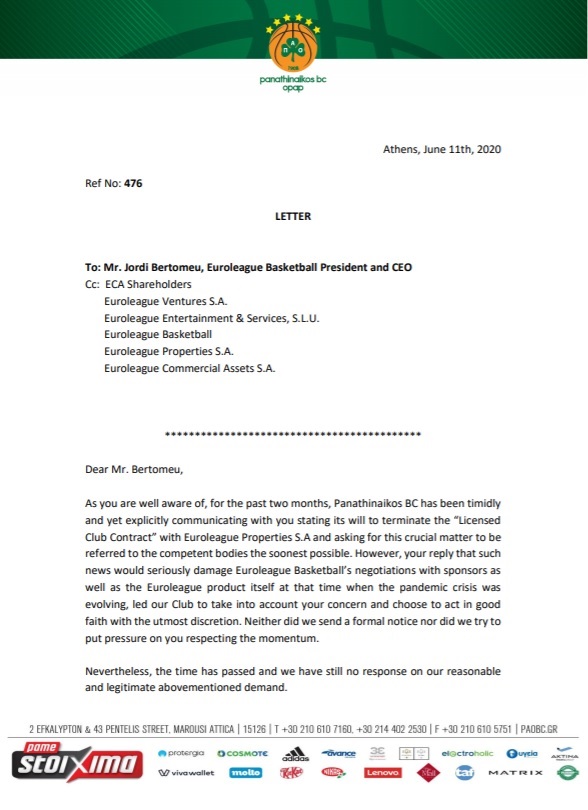 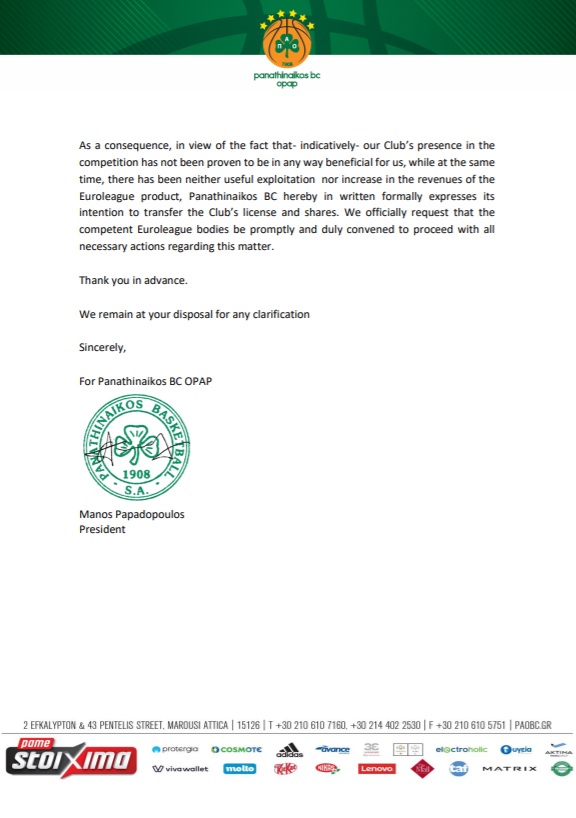 Panathinaikos owner Dimitris Giannakopoulos had said that he hopes the club will leave EuroLeague and join FIBA’s Basketball Champions League in a press conference that was held Tuesday (9/6). Giannakopoulos, who announced that Panathinaikos BC is up for sale for the sum of 25 million euros, criticized EuroLeague and Bertomeu for a “lack of clarity” regarding the annual revenues while commenting on what he saw as several “injustices” his team has faced over the years.