European players have to fight for their EuroLeague minutes

After exploring the share of American players in EuroLeague, which grew by 119% over two decades, RunRepeat’s Dimitrije Curcic looked into how the domestic players have faired over the years when it comes to playing time.

The increase of foreign players in all forms of European sports is a reality that started in the 1990s with the Bosman rule, according to which all Europeans are pretty much considered domestic players, and that led also to the inclusion of more and more non-European athletes in professional teams.

With the US producing hundreds of young basketball players every year, moving to the NBA and Europe, with EuroLeague being their first choice in the old continent for obvious reasons.

On the other hand, European stars are among the marquee NBA names, while the up-and-coming European prospects are following their footsteps because of the obvious financial motivation of being picked on the first round of the NBA.

EuroLeague clubs, nevertheless, continue to produce highly skilled talent, and the globalization of the game offers many different situations. There are cases where their clubs don’t have the chance to fully take advantage of their abilities on the court with Olympiacos‘ Aleksej Pokusevski being the most recent example. There are also young players breaking all possible records, with Real Madrid‘s Luka Doncic being a phenomenon by leading his team to a EuroLeague title even before he was eligible for the NBA draft. And there are also NBAers that decide to prove themselves overseas, Kyle O´Quinn, Norris Cole, or Derrick Williams, and European stars who decide to go back to their origins, Nikola Mirotic, Sergio Rodriguez, Nikola Kalinic, Alex Abrines, Nando de Colo, or Omri Casspi just to mention a few.

With that been said, RunRepeat’s results from the 2,634 EuroLeague players analyzed, shows exactly how drastic the change of the landscape has been. And while the data concern EuroLeague, this is pretty much the reality for all continental and domestic leagues in Europe and beyond.

Over the last three seasons, domestic players enjoyed 30% of all minutes on the court, a 14% drop compared to the first five seasons of the competition where bigger restrictions to both overseas and European players were still in place. 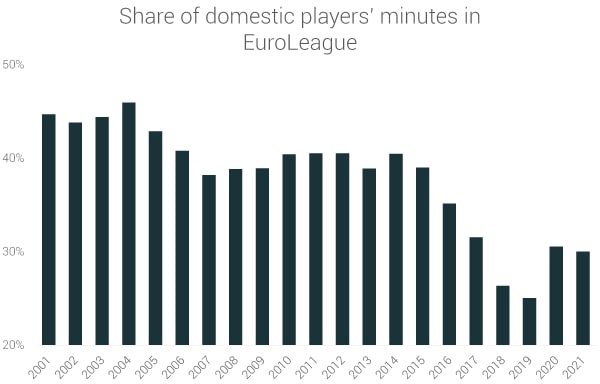 A jump in the numbers has been seen recently after the revolutionary competition format change on the 2016-17 season that brought to all fans a true European league with a higher number of games opening the door to all participating teams to increase their rosters and distribute the on-court minutes more uniformly among the registered players. 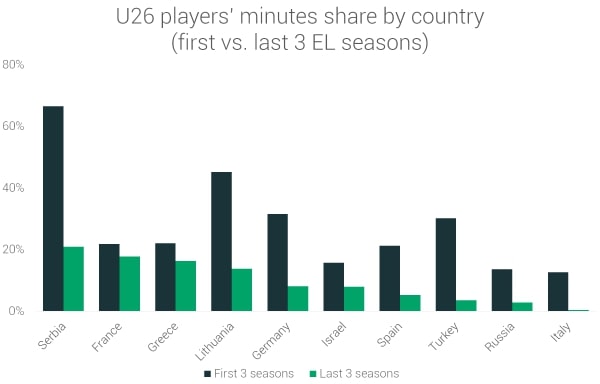 When it comes to players under the age of 26 they enjoy 36.62% of all on-court minutes of the competition with traditional basketball cradles, Serbia, Croatia, and Lithuania leading the numbers.

On the other hand, it has to be noted that Greece and France show up as somewhat of an exception when it comes to keeping domestic players engaged. 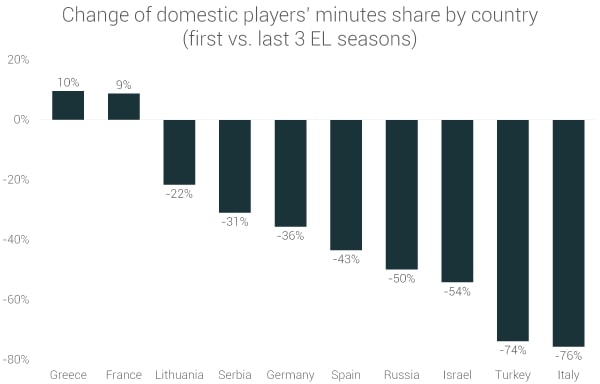 EuroLeague’s policy has always been not to impose restrictions on players’ nationality to avoid restricting teams from getting the highest quality of players on the court. That, combined with the so-called globalization and with the growth of EuroLeague’s profile amongst American players has probably resulted in a higher number of players going overseas to build their professional career, and while the minutes of domestic players may have dropped over the years, these get the chance to prove them against the highest possible level and improve their games.