Euroleague Fantasy: In Sasha we trust

The EuroLeague season starts this week and this means only one thing! It’s fantasy time!

Eurohoops remains faithful to its appointment with Euroleague Fantasy tips, setting this week the foundation for the whole season. And you don’t want to miss out, as the winner of our private league (Eurohoops League, code: 58EC3DAF) will win the prize of a signed EuroLeague jersey.

So let’s get this started! As usual, Round 1 of every league carries risks and we essentially go to the unknown hoping for the best. However, there’s also the knowledge from past years in Fantasy.

And this time around, the recent Eurobasket can be a guide. Many players are already in mid-season form or some others are tired from the preparation period and the games they gave during a month and a half since the beginning of August.

That is why we will try to pick the players who present the less risk, taking into account what they recently did. And what is our first choice? Sasha Vezenkov is an absolute player also in Fantasy terms!

The leader of Olympiakos is constantly moving close to the double-double stat line or achieves it. Yes, the game in Barcelona is difficult for the Greeks, but Vezenkov has a lot of minutes on the floor due to his well-known abilities and we recently saw in the Greek Super Cup that coach Bartzokas prefers him on the court for long stretches, despite the recent addition of Alec Peters.

Vezenkov is expensive with 14.1 points (out of 100), but we think he is worth spending.

We even made him our captain, hoping that he can give double the points of a good night in Spain.

We also pick Rodrigue Beaubois due to the absence of Shane Larkin, Kevarius Hayes who is by far Zalgiris‘ best big man and costs very little (8.8), Nicolo Melli, and Baskonia‘s new guard Darius Thompson who has so far presented excellent numbers in Spain.

Our coach is Zeljko Obradovic, who we believe can pass through Berlin with Partizan, and we will take small gambles with our substitutes.

A duo from Alba, Johannes Tiemann, and Jaleen Smith fit into our budget, while we also opted for Bayern’s Jaramaz who was even cheaper.

Trifunovic from Partizan is also a modest solution “budget-wise”, so we had money left over to pick Derrick Williams from Panathinaikos, who is the only really experienced power forward in the roster of the Greeks and will get his minutes no matter what. 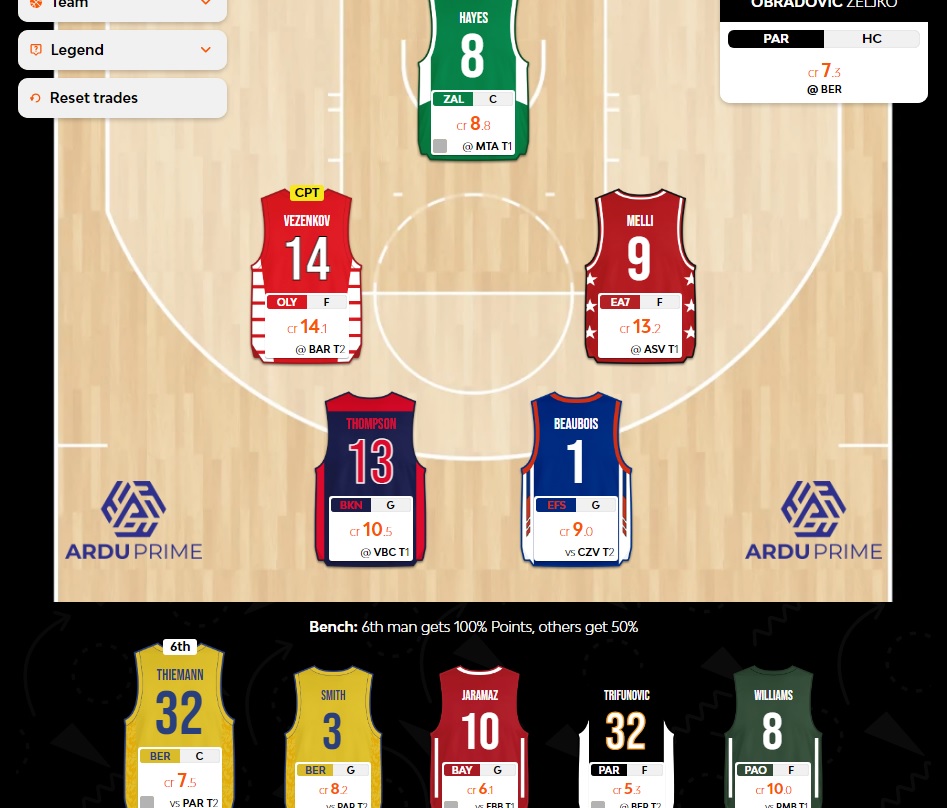