Mario Hezonja denies ruling out a return to the NBA

Real Madrid begins its European adventure in Athens and Eurohoops had the opportunity to chat with Mario Hezonja, a former Panathinaikos player

The curtain rises on a new EuroLeague season and from Athens, Real Madrid and Panathinaikos will be in charge of welcoming the best European basketball.

But beyond the start of the competition, October 6 is a date that Mario Hezonja (Dubrovnik, 1995) had surely marked on his calendar. The Croatian -perhaps Real Madrid‘s biggest signing this summer- returns to OAKA. His time with the Greens was almost fleeting but it seemed to be a child’s dream that he had to fulfill before taking on bigger challenges.

Before his EuroLeague debut with the white jersey, Hezonja answered Eurohoops’ questions with kindness and in perfect Spanish.

Eurohoops: I must admit that a couple of years ago if someone told me you were going to play in Spain again, I wouldn’t have thought you would be wearing a white jersey…

EH: But growing up in Barcelona’s young squad, having your rights in Europe, logic says that…

EH: More and more players have played for Real Madrid and Barca but fans don’t get used to it. How do you see it from a professional point of view?

M.H.: I had a good time in Barcelona. I was very young, I left there to go to the NBA. I wasn’t very lucky and after a few years, I decided to stop and do a reset. I was very lucky to get an offer from Panathinaikos, which was my favorite team since I was very, very young. I always watched them. After that, I had to get more rhythm, be more serious, and feel EuroLeague with a big role and I could have that in Russia. After the bad luck, with everything that started last season, I was also very fortunate. It was a great honor for me to receive the offer from Real Madrid and I was truly happy. And now I am here.

EH: I guess you had more offers, what made you decide to sign with Real Madrid?

M.H.: Trophies! [Laughs] The coaching staff have known each other for a very long time and they are really good, they know a lot about basketball. I knew more than 90% of the players. How the team plays, the system on the court. How it is off the court, all of them together is something incredible. I think it’s going to make me a better player, it’s going to help me learn a lot more and I’m also going to help the team. We are all on the same page, which is winning. Winning games, winning trophies together and that really makes me very happy. I see that all the people, from the first to the last of the staff, the players… they all have the same idea, my same mentality.

EH: I asked you what made you decide to join Real Madrid. A personal doubt, why basketball and not water polo? [Note: his father was a great water polo goalkeeper]

EH: I think you are very good at it.

M.H.: Yes, yes! [laughs] Football yes. I never say how good I am, I don’t like to do that, but I can really play football. But I played all these sports because my friends played them and I didn’t want to be alone, I wanted to play with them. We played water polo, we played handball, we played soccer… You name it. But basketball was my love since I was little. When there was no one to play any sport, I played basketball alone on the playgrounds. When my father was playing with his teammates, I played alone in another basket. I started in school… and the rest of my story I think you already know.

EH: You told me about your beginnings and how your career has been. In the last year and a half, you have played for three teams but you signed for two seasons in Madrid. Were you looking for some stability?

M.H.: Yes, that’s true. It can be very subjective when you’re a player, you don’t think so much about those things. Actually, I only think about basketball. But the truth is that it’s very difficult to move around, there are a lot of things to take into account. Houses, family, and stuff like that, makes life difficult. But since I only think about basketball, about improving, making the team better, and winning I haven’t realized that I have moved a lot these years. Here, in Madrid, I am looking for a little more stability.

EH: And the weather is better than in Kazan…

M.H.: I prefer snow rather than the sun, but that’s okay [laughs].

EH: How is your adaptation to the club going and to a role apparently different from the one you had in Panathinaikos or UNICS?

EH: You are having your debut in EuroLeague with Real Madrid in Athens. I guess it’s a special game for you…

M.H.: Yes, well, for me every game is special. Besides, I’m wearing this jersey. I might have a history with Panathinaikos but let’s get down to business. It’s a year in which we are going to try to win a lot of games and for me, every game is going to be like a debut. It’s my first year here and I have respect for everyone but what we really want is to win.

EH: You have played very few games for Real Madrid but can you compare both clubs?

M.H.: They are top-level in Europe. I think they are the two biggest in history. When you are inside the club, you feel something. It’s pride, you get very happy but you also have to be very serious because everything is really important. Every game is important, every league is important and every trophy is important. If you are not used to it you can feel pressure and not every player responds well to pressure. I really think they are the two biggest clubs in Europe. I had a very good time there, as I am having here.

EH: What do you think Panathinaikos needs to return to the old glory?

M.H.: Stability. Let the good players stay, let the coaching staff stay, and little by little they will return to their level, where they should be. Also, support. They have support from the fans and plenty of it, but I’m talking about the front office and so on. I think they will be fine very, very soon. 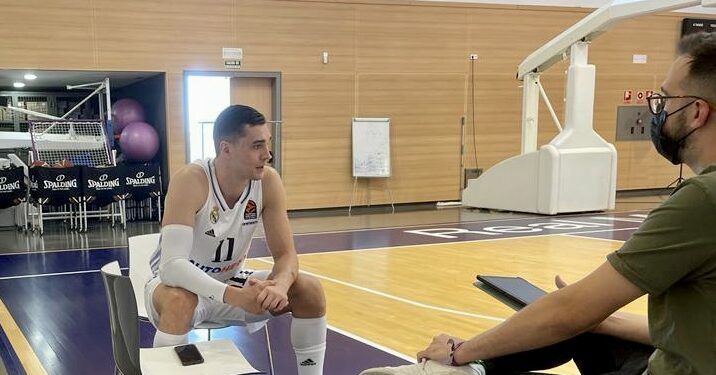 EH: I remember something you said in April about ruling out a return to the NBA in the future. Is that your position?

M.H.: No, no. That’s a lie. That’s a lie. Something like that always comes out but I didn’t talk to the media. We barely had interviews in Russia, I don’t know how that came out. That’s not true. About this, if I can say something about what I really think is that I am happy here. I have a lot of things to do in Europe and well, in the future, if something happens we’ll see. But really, I want to be here as long as I can, I want to earn a lot and I am happy.

EH: But do you prefer European basketball or the one over there?

M.H.: I was talking with Dzanan [Musa] about how ironic it is. I can’t say that it’s easier to play there than here, like the others, because I wasn’t lucky enough to play and have a role with a lot of minutes. The irony is that if the game here is more difficult, in my first year and in Russia I had better stats. I can’t say that [laughs]. If in the NBA you make it big, you are pushed by the team, the coaching staff, and the front office, it’s going to be amazing, you can do everything. The court is bigger, you play much more one-on-one and you can show your individual quality. Here you have to be very smart. When, where, there’s a lot of help defense… And nobody wants to lose, you know? In Europe, a team loses and you feel the pressure. It’s much more difficult because there’s club pressure if you lose.

EH: They said you were able to copy Zach Lavine’s slam dunk contests. Can you dunk better than him?

M.H.: This guy has won the slam dunk contest twice. How many have I won? Zero. Who says such things? [Laughs].

EH: So do we need a dunk contest and an All-Star in EuroLeague?

M.H.: Ugh, good question. I think this league is very serious. There’s no time to do an All-Star, although it would be very, very fun for the fans and the media. But I don’t think there’s time [laughs]. When playoff time approaches the head is 180 percent focused, it’s unbelievable. It should be in February or something, right? But if you play in Spain, a country that has the King’s Cup, when are you going to play? At Christmas? There’s no time either. The EuroLeague is very demanding and very serious. And if you play the ACB, too.