EuroLeague Fantasy: De Colo’s return and the safe choice that is Wilbekin

Nando De Colo has returned from his injury and you can add him to your Fantasy team. Can’t go safer than that…

You probably removed Nando De Colo from your Fantasy team since he was out for some weeks. And you possibly went with his Fenerbahce Beko teammate Kostas Sloukas. Trading Sloukas for De Colo isn’t simple since the Greek guard costs much less (2.68 vs. 1.97) than his teammate, despite increasing his game value.

If you make some adjustments, you can add De Colo and leave Sloukas out. The question is: Do you want to? Will Sloukas’ value see a decrease? When De Colo was in, Sloukas had an “issue” with his fantasy output. Will Obradovic equally distribute responsibilities with Sloukas in form?

Injuries lead to other solutions

Mateusz Ponitka’s injury will leave Zenit St. Petersburg with a gap that Tim Abromaitis will be called to cover. Pay attention: He costs just 1.12 and finished the latest VTB League game of the Russian team with 23 points and 28 PIR. Sure, Zenit hasn’t been exactly trustworthy in EuroLeague but they face a not-so-scary opponent in the face of Bayern Munich. Abromaitis may do something good.

On to Scottie Wilbekin. Yes, he costs 2.3 but we can’t see any better choice than him. Coach Giannis Sfairopoulos’ team is injury-plagued at the point guard position since they lost both John DiBartolomeo and Nate Wolters in the Round 11 win over Bayern Munich.
Fantasy gives us a huge opportunity to acquire Wilbekin who’s left alone on Maccabi‘s backcourt. Until the team signs another point guard, Wilbekin is a safe option for all of you.

For those who follow us, we want to say that we keep our team as it is. The reason? They produced in the previous week and there’s no big flexibility with our team budget. We don’t want to trade anyone out of Nick Calathes, DeShaun Thomas, Nikola Mirotic, Facu Campazzo, Vasilije Micic and Greg Monroe. We will continue with Marcus Eriksson and Shavon Shields, hoping that we will get their “money’s” worth.

Nick Calathes and Nikola Mirotic are our captains. They face each other since Barcelona hosts Panathinaikos. 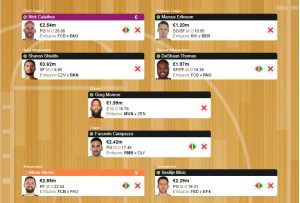