Most efficient EuroLeague teams by quarter

Turkish Airlines EuroLeague with a hand for Synergy Sports Technology presents its latest Stats Review installment featuring alternative views on Regular Season Round 13 and the 2019-20 season so far.

Per EuroLeague: “The last double-round week of 2019 could prove to be pivotal as the standings have become more stratified at the top and bottom, but quite packed in the middle. Here’s a review of the key statistics in the competitive Turkish Airlines EuroLeague landscape.

In the matchup between the EuroLeague’s top two defenses, second-ranked CSKA Moscow came up short against top-ranked Maccabi FOX Tel Aviv at Menorah Mivtachim Arena. Allowing 1.15 points per possession in a 10-point defeat, CSKA led at halftime but then fell victim to a pair of super-efficient performances from Scottie Wilbekin and its own former player, Othello Hunter. CSKA also scored 0.87 points per possession offensively, which is well below its 0.99 season average, but nonetheless is the top efficiency registered by an opponent in Tel Aviv this season by a significant margin. Home-court advantage looms large in several EuroLeague venues, but even in defeat CSKA provided Maccabi with its most difficult test at home this season.

The EuroLeague has a somewhat unique efficiency profile at the moment. Across professional basketball, many leagues tend to see offensive efficiency vary significantly quarter to quarter as the result of unbalanced roster depth, fatigue, the way the bonus is implemented, or late-game free throw shooting disparities. In a unique quirk, however, the EuroLeague has no such drop off. The season average of 0.98 points per possession holds within 2 points per 1,000 possessions for each individual quarter leaguewide.” 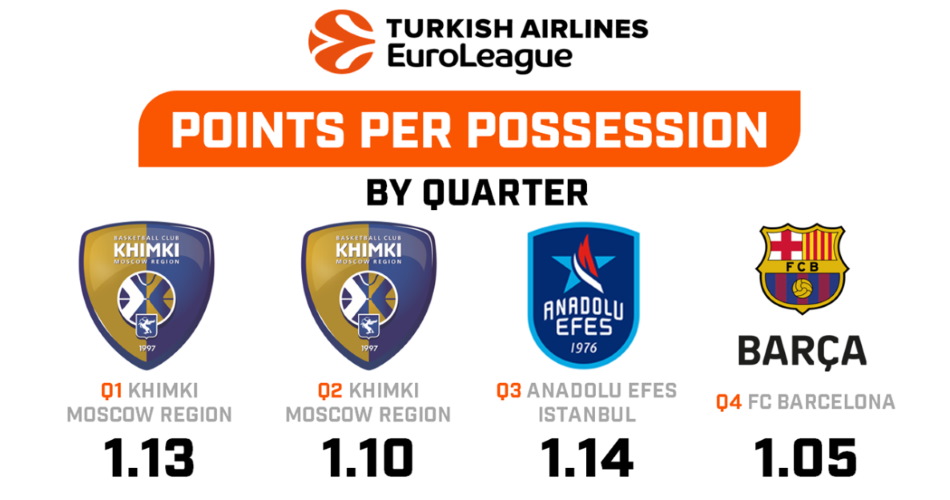 Read the rest of the Stats Review on EuroLeague.net.