The many frontline issues of Fenerbahce Beko give us the “green light” to acquire Derrick Williams.

Fenerbahce Beko will be missing Jan Vesely, Joffrey Lauvergne and Ahmet Duverioglu at the center against Olympiacos Piraeus on the road. Only newly-signed Malcolm Thomas remains and he hasn’t yet been activated in the EuroLeague Fantasy. You should definitely pick him up when that happens but until then you should pay attention to Derrick Williams.

Williams played 40 minutes in Fener‘s Round 16 loss to Valencia. He costs only 1.64 and even though he hadn’t been exactly tremendous this season, we think he deserves a second chance.

The arrival of Aaron Jackson and Jalen Reynolds to Maccabi Tel Aviv may change a couple of things in your lineup. Especially if you already have Othello Hunter at center and/or Elijah Bryant/Tyler Dorsey at the guard. Jackson and Reynolds are still inactive in Fantasy, however, if they play the action of the rest of the players will see a decrease.

So think about if you want to keep them or not. If there’s an update with the participation of Maccabi’s newcomers then, keep one-two changes available to use them.

– CSKA Moscow guard Daniel Hackett costs little (0.9). Last week he had 27 in PIR. Do you think that he’ll continue like that in the upcoming game against Panathinaikos Athens?

– David Lighty: The American guard of ASVEL saw a sudden, yet reasonable, increase in his price (1.70) since he averaged 17.3 points and 20.5 in PIR in the last four games.

There are three changes this week: We remove Olympiacos center Willi Reed (who produced in the previous round) due to Nikola Milutinov’s return.

Our current choice is Zenit St. Petersburg center Colton Iverson. He plays a lot recently and his cost is near-free. We also added Khimki Moscow forward Jeremy Evans who also doesn’t cost much and is also in good form recently. And, last, we spent big to acquire Fenerbahce star guard Nando De Colo.

De Colo had four average to bad games when it comes to his Fantasy value. This is exactly the reason why his price dropped to 2.30. His cost was even lower before he notched 37 PIR against Valencia. We believe in the momentum and he’s a traditional Fantasy player since he scores a lot with pretty good percentages. He also makes assists and gets rebounds. 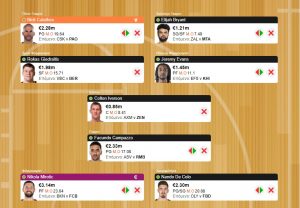