Vassilis Spanoulis reached one more historic milestone and wants to keep going at least for one more season.

His nickname is “Kill Bill”, but at this point, we should probably call him “King Bill”. Vassilis Spanoulis became in the game against Fenerbache the EuroLeague All-Time top scorer, surpassing Barcelona legend Juan Carlos Navarro with 4157 points over 4152.

Very few summits are left unconquered for the player of the decade, according to Eurohoops fan vote. This is also the general consensus across the old continent for the player who led Olympiacos to back-to-back EuroLeague titles in 2012 and 2013, winning twice the Final Four MVP award.

And despite being 37-year old, Spanoulis clarified that this season is not going to be the end of the road for him: “The most probable scenario is that I will play also next season. I take my decision every summer. I work on my body, I practice and I want to help my team reach its goals. My motivation is to get to the playoffs, to get to Final Four, my love for the game. Without the game, I would have been a different person. It’s finished, OK, but I wanted this to happen to win the game, so it’s a bad taste at the end of the day. When I left my home, my kids told me “daddy get the record and win the game”. We couldn’t win it, but we have to get back for the next one”.

Fenerbahce Kostas Sloukas, a former teammate of Spanoulis in Olympiacos and the Greek national team added: “It’s amazing what [Spanoulis] has achieved. I was with him for seven years and I know how hard he works and how tough his mentality is. I’m proud of him and he deserves to stay at the top of EuroLeague.”

Zeljko Obradovic, his former coach at Panathinaikos, also wanted to congratulate him: “Everyone understands how hard he works, and without any question, he deserves to be in this position”.

Obradovic applauded his player, like the rest of the gym, after he made the historic shot which pushed him over Navarro.

When Obradovic was asked about the crucial decision of Spanoulis to leave him and Panathinaikos back in 2010 and also to make a comparison with former EuroLeague great Dimitris Diamantidis, he reacted humorously: “The same question again? It was the same with Diamantidis, it’s not a new story. Everyone knows how hard they work and they are two of the best ever players in Europe.”

Spanoulis was honored after the final buzzer with another Greek EuroLeague legend, Theo Papaloukas presenting him with an award and the scoresheet of the game.

Here’s the scoresheet of a night which will be remembered. 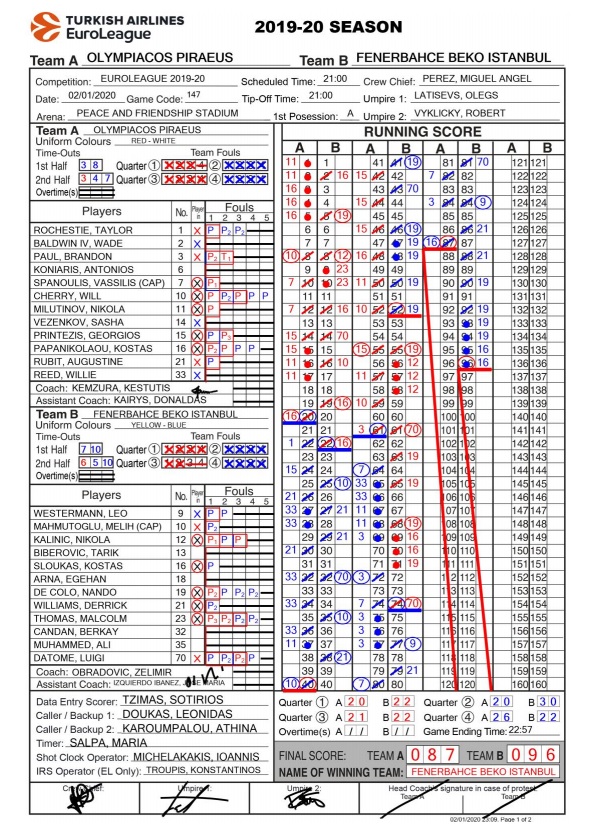