Down the stretch of the Basketball Champions League Regular Season, five players rise above the rest.

Per Basketball Champions League: “Gameday 12 featured pivotal clashes in the race to secure a spot in the Play-Offs and Team of the Week reflects the several standout performances we witnessed in this tough battle.

Team of the Week includes two players who led their respective teams to victories that earned them a play-off berth, and three players who fueled wins that might prove crucial in the race.

Marcus Foster of UNET Holon, Vitor Benite of San Pablo Burgos, Robin Benzing of Casademont Zaragoza, Dyshawn Pierre of Dinamo Sassari and Emanuel Terry of Teksut Bandirma make up Team of the Week for Gameday 12 of the 2019-20 Basketball Champions League. 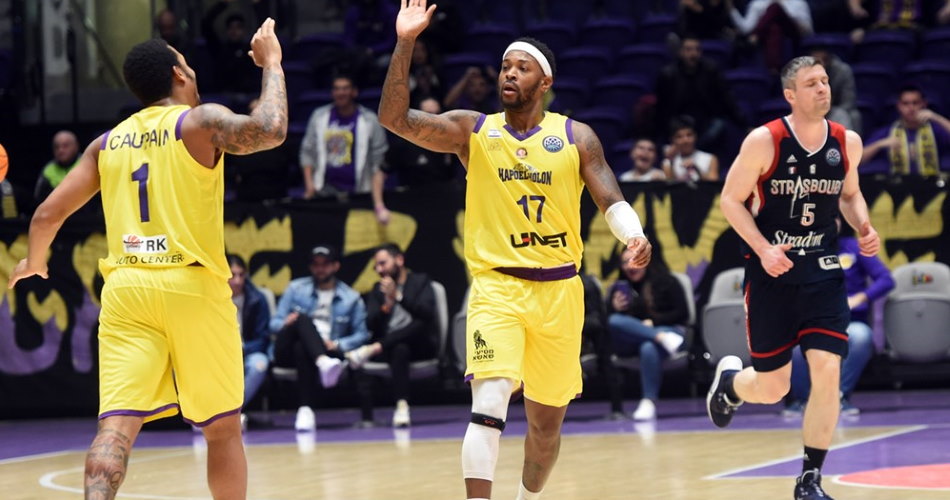 Foster becomes the third Holon player to claim a spot on Team of the Week this season, after helping the Israeli team on Tuesday to clinch a pivotal win in the play-off race and certainly their most impressive so far.

The 24-year-old guard steered Holon through an explosive third-quarter stretch that earned them a 20-point cushion over BAXI Manresa and, when the hosts rallied back in the final period, he provided the Israeli side with the safe pair of hands they needed to hold on.

Holon inflicted on the Spanish team their first home defeat, 67-65, as Foster finished with 15 points, 4 assists, 3 rebounds, 3 steals and 1 block for an efficiency rating of 12.

🇧🇷 Nothing like a Brazilian dribbling around defenders. @Neymarjr would be proud Vitor! #BasketballCL

Good things happen for Burgos when the Brazilian international gets the hot hand and on Wednesday night, it was the turn of former BCL champions AEK to witness that inescapable fact.

Benite shot 8 of 13 from the floor, including 4 of 6 from three-point range, and collected 23 points as well as 3 rebounds, 1 assist and 1 steal to fuel the Spanish team’s 93-76 victory over the Athens side.

The 29-year-old shooting guard tied his season-high efficiency rating of 23 and has earned a Team of the Week nomination for the second time in his career, both this season as a Burgos player.

Nobody called the Dijon firefighters, but a man caught fire on Tuesday night in the course of Zaragoza’s 105-73 victory over the local team, and his name was Robin Benzing.

The German international became the first player in BCL history to drill eight three-pointers in less than 30 minutes – in fact it only took him 23 minutes and 54 seconds to go 8 of 11 from downtown. He collected a season-high 32 points, also adding 2 rebounds, 1 assist and 1 steal.

Benzing who registered a season-high efficiency rating of 30 on the night his team punched their ticket to the Play-Offs, has become the first ever Zaragoza player to claim a spot on Team of the Week.

On to the next round! @dinamo_sassari secure their Play-Offs ticket after a solid performance on the road in France! 🎉 #BasketballCL

There is only one occurrence this season more common than Pierre making the Team of the Week, and that is Pierre posting a double-double to lead Sassari to a win.

The Canadian forward had 17 points and 12 rebounds on Tuesday, his fifth double-double of the season, and paced Sassari to an 88-83 success at SIG Strasbourg that secured the Italian side a place in the Play-Offs.

The versatile Canadian player, who added 4 assists and registered an efficiency rating of 22, had also made the Team of the Week on Gameday 1, when he was indeed named MVP, and on Gameday 6.

Bandirma needed a win over RASTA Vechta on Tuesday to not fall behind in the play-off race in Group B and Terry contributed by doing what he does best – cleaning the glass – and registering the league’s third-highest efficiency rating this season in the process.

Terry’s performance was rated at 39 as he brought down a season-high 14 rebounds and added 24 points to post his fifth double-double of the season, powering the Turkish team to an 82-70 win over their visitors.

The Bandirma big man, who is now leading the league in rebounds, registered his eighth game this season with 10 or more boards. This is his second appearance on Team of the Week and he is edging ahead of team-mates Sehmus Hazer and Jaime Smith, who have one each.”