It’s heating up. The Play-Offs are about to start, which means we are down to 16 teams, which means the picture in the MVP Race is becoming clearer and clearer with each passing week.

Now, there’s still a long way to go, and the fact that the picture is clearer doesn’t mean we’ve entered the 4K era of the MVP Race. We’re getting there. But right now, we’re at a 720p quality of the picture, going for that 720HD target as soon as possible.

If you’ve followed the First Checkpoint, the Second Checkpoint or the Third Checkpoint, you know that a) it’s not an official race, b) we need a set of questions to set up the ranking, and c) the real award for the MVP of the Season will be handed during the Final Four.

That b) part is tricky. During the Regular Season, we could always point the finger to the team record and eliminate a lot of people because their team wasn’t at .667 winning percentage – the winning percentage which turned out to be enough to have home court advantage during the Play-Offs. Having home court advantage is cool. Because we’ve flipped the format and we’re playing best-of-three series. Series clincher at home is cool, you know.

Let’s change the set of questions then. Here we go, these need to be answered so we can get our MVP of the Fourth Checkpoint:

(1) Is your team in the Play-Offs because of you?
(2) Will your team make the Final Four because of you?
(3) Did you have one game that said “OH MY, HE’S AN MVP!” this season?
(4) Do you have the season-long numbers to justify the nomination?
(5) Is it your birthday TODAY? 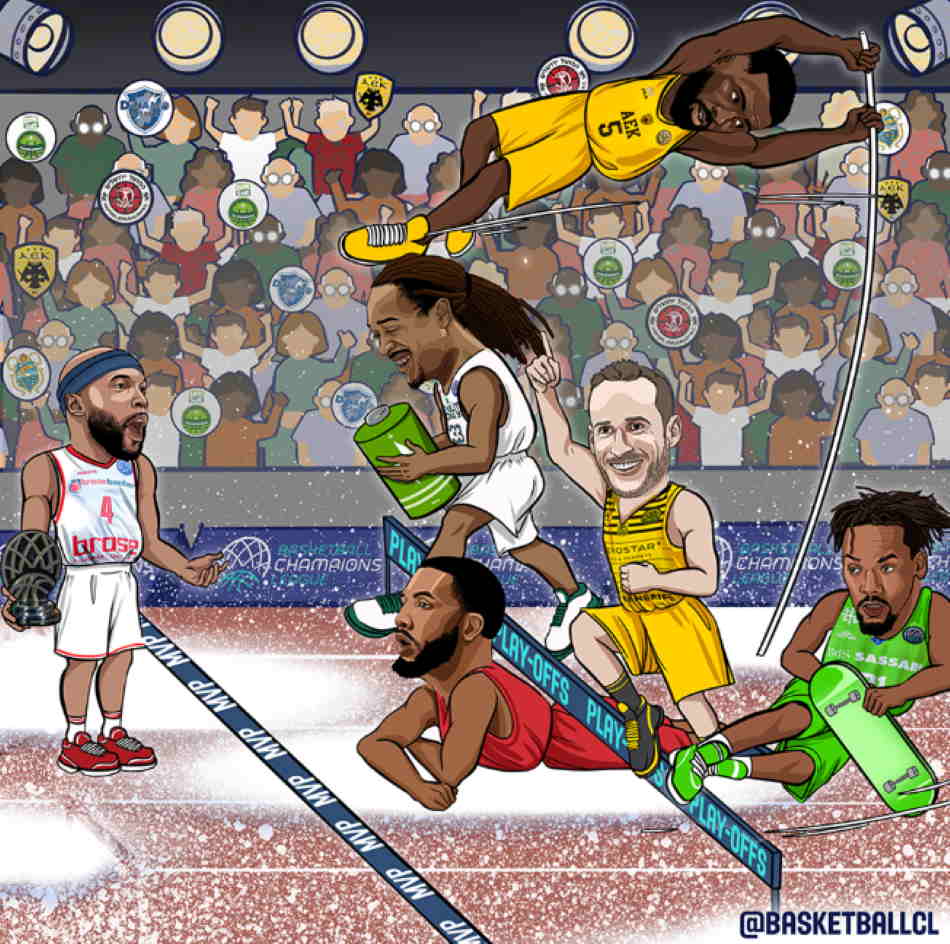 (1) Yep. Even if you don’t count in the leadership skills he has, you could just rewatch the final minutes of the game against PAOK to see that his clutch three-pointers from the same spot gave Dijon a big time win.
(2) No. Because Lamonte Ulmer is playing really good. Because Rasheed Sulaimon just won the MVP of the Leaders Cup award in France. Because Axel Julien is also playing better than ever. Because Dijon figured it out and have more than Holston to beat you.
(3) Yep. He had 15 points, 13 assists, and Dijon were +38 (yes, plus thirty-eight) with him on the floor against Besiktas Sompo Sigorta on Gameday 7.
(4) 11.1 points, 6.9 assists, 2.5 rebounds, 1.8 steals. That’s a yes, I guess.
(5) Nope, turned 34 a month ago. So he’s not our number one MVP of this checkpoint, sorry.

(1) Yep. The fact that Nizhny Novgorod are 1-3 in games where Brown scored less than 10 points suggests that they would’ve struggled greatly without him.
(2) Yep. Because he’s the obvious star of the team and now needs to take over.
(3) Yep. Brown had not one, not two, but three points-assists double-double games, but the one which said “OH MY, HE’S AN MVP!” was against Iberostar Tenerife, with 26 points, 5 assists, 4 steals to lead Nizhny to an unlikely win.
(4) 13.9 points, 6.4 assists, 2.6 rebounds, 1.9 steals. Sure.
(5) Nope. Turned 30 in August. So he’s not our number one MVP of this checkpoint, sorry.

(1) Yep. The only time he scored in single digits, Turk Telekom lost that game at BAXI Manresa. Meaning, they would’ve been at 0-14 without his high scoring outputs, right? Right? I know it’s wrong, but right.
(2) Yep. Because Kyle and Moustapha Fall are a nightmare matchup down low.
(3) Yep. His 33 points and 10 boards against Filou Oostende were just a week after his only single-digit-scoring game, so this shows character.
(4) 18.5 points, 6.6 rebounds, 43.2 percent on nearly six attempts per game from 3PT range. Yep.
(5) Nope. Turned 27 in October. So he’s not our number one MVP of this checkpoint, sorry.

(1) Yep. Double digits in last nine Regular Season games, he’s their main scoring threat.
(2) Yep. Because even though Jaromir Bohacik can float it up with the best of them, and Zach Hankins could be the best big man on defense, ERA Nymburk’s chances will depend on Hruban’s shooting.
(3) Yep. He had 28 points, done on 11-of-17 shooting from the field, against Mornar Bar. People seem to be having good games against Mornar, huh?
(4) 14.3 points, 4.3 rebounds, 2.6 assists, 1.3 steals per game. But 17.2 points over the last nine.
(5) Nope. Turned 30 in August. Not the MVP here.

(1) Yes, very much so. His last game, when he got injured in Burgos after six minutes, was the only instance that he finished with less than 14 points.
(2) Yes, very much so. This is the time of year where Langford needs to switch through gears, and figure out all the matchups in the Play-Offs to send AEK back to the Final Four. He’ll win games, or die trying.
(3) Yeah, like four of them. He hit the 30-point mark against San Pablo Burgos, had three 27-point games, basically, everything about him says MVP.
(4) 19.0 points, 2.9 rebounds, 2.9 assists. MVP.
(5) Nope, turned 36 in September. So not the MVP in this checkpoint, but come on, we all know it. He’s the MVP if AEK make a splash again.

(1) Yep. Even coach Gianmarco Pozzecco said that NBA is the next step for this guy. So, I guess having an NBA kind of guy helps you book home court advantage in the Basketball Champions League, doesn’t it?
(2) Yep. Dwayne Evans did take over some of the scoring and rebounding duties lately for Sassari, but Pierre could enjoy the matchup with Burgos in the Round of 16.
(3) Plenty of picks in this department. Gameday 1 MVP with 24 points, 12 rebounds against Lietkabelis, 16 points and 19 rebounds against Torun, 23 and 10 against Holon…
(4) 13.7 points, 8.7 rebounds, 2.3 assists. MVP.
(5) Nope. Turned 26 in November. But he was at the top of the second checkpoint because of it.

With his 17 assists (and just one turnover) tonight, Marcelinho Huertas just tied the #BasketballCL all-time high. Scottie Reynolds dished out 17 assists for Cibona back in 2017.pic.twitter.com/2zS6ZNiuBu

🌟 @TaeThomas35 is playing the best basketball of his professional career right now, here is your GameDay 13 MVP in action! #BasketballCL pic.twitter.com/MLRpNYSmRV

(1) Yep. TaShawn Thomas shot 94-of-127 from the field during the Regular Season. 94. Of 127. Ridiculous.
(2) Yep. Even with James Feldeine, J’Covan Brown, Suleiman Braimoh, Tamir Blatt and all the others, TaShawn is playing at such a high level that you could see him set some sort of record in the Play-Offs.
(3) Oh yeah – 27 points on 11-of-14 shooting, 6 rebounds, 4 assists, 4 blocks, 1 steal, 38 efficiency against San Pablo Burgos on Gameday 13. MVP of the week then.
(4) 15.8 points, 74 percent shooting (SEVENTY-FOUR), 6.0 rebounds, 2.1 assists, 1.5 blocks per game, just give him the trophy already.
(5) YESSS!!! Happy birthday Thomas the Tank Engine! You get to celebrate it as the front runner in the MVP of the Season race, and that’s the best gift you could possibly receive on this wonderful day, right? Right.