Steven Gray lifted Peristeri to the Basketball Champions League Regular Season opening Gameday win against Rytas Vilnius shattering multiple records in the process and went on to the MVP of the Month for October award.

The Peristeri shooting guard registered a BCL all-time high Performance Efficiency Rating (PER) of 47 on the night, to lead his team to an 106-88 road win in their Group E premiere.

Gray is well-known in basketball circles on both sides of the Atlantic for his unassuming nature, and it turns out that even such a momentous occasion was not enough for him to seek out where his achievement ranked. Luckily for him though, his better half was watching. 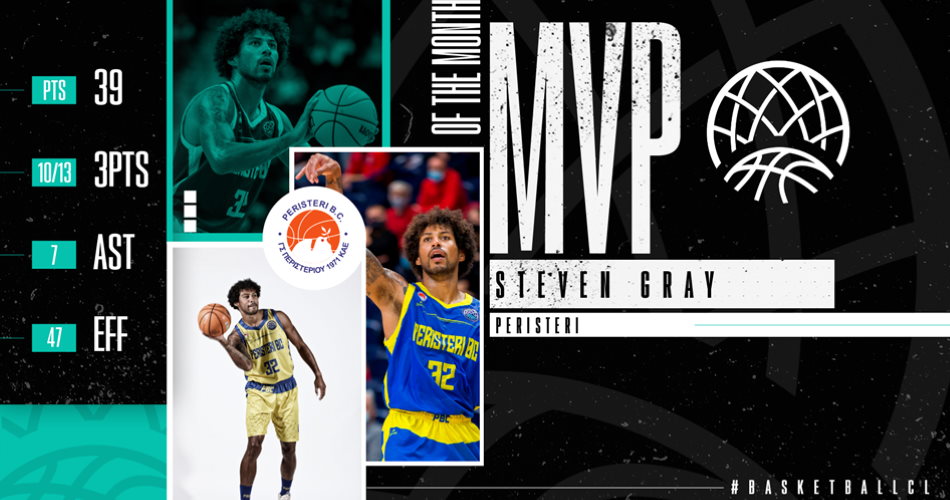 “I am humbled to receive the recognition. My wife was the one who messaged me that it was a new record later that night,” the 31-year-old American told championsleague.basketball.

“I was surprised when she told me, breaking a record hasn’t ever been something I’ve given much thought to.

Gray tied the BCL record for most made triples in a single game, as he knocked down 10 treys on 13 attempts in Vilnius. The only previous player to hit 10 threes in a BCL game, Jimmy Baron, had needed 15 attempts.

“My mindset throughout the game remained the same and that was to trust my shot,” Gray said.

“My teammates were supporting me with extra passes, setting screens and spacing the floor and with that came good looks at the basket.

“After the last one, it was like for the first time I could begin to appreciate everything that had happened.

“The win was obviously the priority and that was the focus through the game. But after the last one, and seeing the reaction of my teammates, it was something very special for me.”

His teammates were at that moment just as unaware of the PER record as Gray himself was, but their reaction was certainly justified even by a simple glimpse at the boxscore – he had poured in 39 points and added 7 assists, 5 steals and 3 rebounds in just 29 minutes and 40 seconds on the floor.

Gray however insists that the strength of Peristeri this season is the fact they have several guys who can come up with a big performance on a given night.

“I believe our roster has a quality that will make it difficult for teams to decide what they will try to take away from us and what they are willing to risk,” the October MVP explained.

“As for my personal role [on the team] the priority is to give effort on the defensive end, and to help keep a rhythm and continuity within our offense.”

The Gonzaga graduate who first came over to Europe on behalf of Ventspils in 2011, joined Peristeri in 2018. This past summer he needed very little time to agree to re-sign with the western Athens-based club.

“[The main factor behind that decision] was the standards of the club,” he explained.

“There is a level of respect between management and the staff and players that can be difficult to find.

“The quality of the people from the top to the bottom of this club is something special and should be appreciated when you find this.”

Setting a huge PER record and claiming monthly MVP honors was never going to go to the head of somebody as humble as Gray, so it’s hardly surprising that his outlook on the season didn’t change after his Vilnius exploits.

Stop playing wit this man!!! Bro has a cannon!! https://t.co/gOd2y4rfFB

“Our aim should remain the same as it has since our first days together, which is the next day and the next game and try to improve day by day,” he said.

“I believe you have to always strive to improve and each year with this club we have continued to move forward. I am hopeful that this is a trend that can continue.”

Does something similar apply to his PER record too? Will that continue to stand for a long time?

“I’m not sure, the great thing about basketball is that anything can happen,” the October MVP replied.

“With how much the competition has grown and the caliber of teams and players in the BCL, all I can say with any certainty is I’ll have the record for at least a week.”

What a week though it has been.”