With the first leg of the FIBA World Cup qualifiers done, there are a few changes in the World Rankings, as Lithuania surpassed Italy for the eighth position

Following the first leg of the FIBA World Cup qualifiers that took place in November, there are a few changes in the FIBA World Rankings for Men’s Basketball.

Most notably, in the Top 10, Lithuania surpassed Italy with two victories in the recent window, to clinch the 8th overall spot.

Belgium has moved up to the 36th spot, Cote d’Ivoire made the jump to the 40th place, Sweden has now risen to no. 51 and the biggest jump came for Cape Verde, which has jumped 26 points to place no. 74. 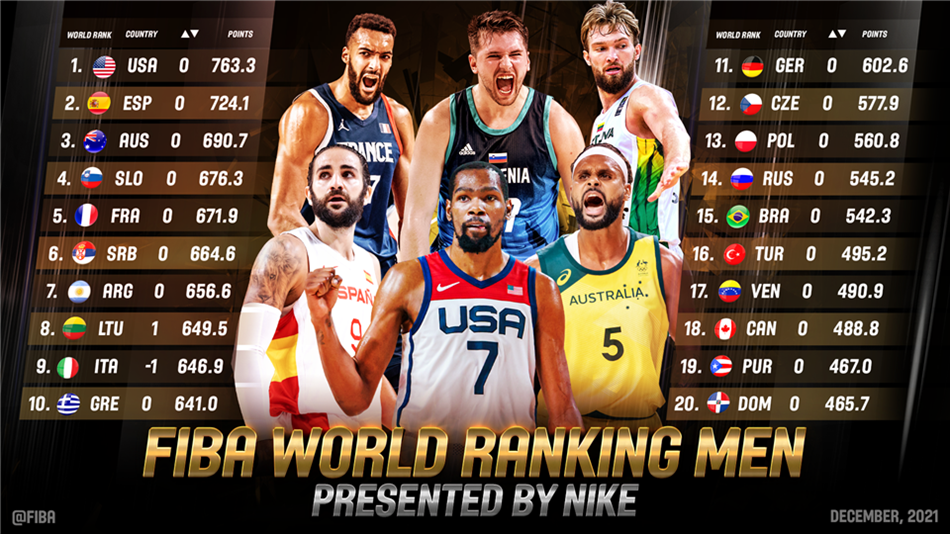 The first window of the FIBA Basketball World Cup 2023 Qualifiers was captivating as national sides launched their bids to reach the 32-team showpiece event that will be staged in Indonesia, Japan and the Philippines.

Strong results have led to changes in the latest FIBA World Ranking Men, presented by Nike, especially for the likes of Lithuania, Belgium and Sweden in Europe, Cote d’Ivoire and Cape Verde in Africa, as well as Saudi Arabia in Asia.

Lithuania leapfrogging Italy for the No. 8 spot constitutes the only movement inside the top 10 after the Baltic giants romped to an 89-69 home victory over Bulgaria and a 74-66 win away at No. 12 Czech Republic, while Italy split their games against Russia and Netherlands.

Belgium’s rise to No. 36 owes to their convincing 83-57 victory at Slovakia and a thrilling, come-from-behind 73-69 triumph over No. 6 Serbia in the European Qualifiers.

Meanwhile, Sweden climbed six places to No. 51  because of solid efforts against much higher-ranked teams. They were impressive at home against No. 34 Finland, claiming a 72-62 success in Stockholm, and in their next game at No. 4 Slovenia, only fell, 94-89.

The biggest mover in the World Ranking was Cape Verde, Semi-Finalists at this past summer’s FIBA AfroBasket. The Blue Sharks have jumped 26 points to No. 74 after opening their African Qualifiers campaign with a 79-71 upset of No. 23 Nigeria, and following that with narrow defeats to higher-ranked Uganda and Mali.

Cote d’Ivoire also benefited from strong play in November, rising six places to No. 40 after a stunning come-from-behind win over Angola, and big triumphs over both Central African Republic and Guinea.

In Asia, Saudia Arabia confirmed their solid showings in the FIBA Asia Cup Qualifiers 2021 were no fluke in two games against Jordan, a much higher-ranked country at No. 39. Jordan won the first encounter by just seven points and the Saudis prevailed in the second by eight points, leading to their jump of eight positions to No. 79 in the World Ranking.

Four years after the introduction of the new ranking and as men’s national team basketball enters a new cycle leading to the FIBA Basketball World Cup 2023, the region weights (C) considered in the points calculation have been slightly adjusted based on regional performances in FIBA competitions at world level over the past eight years.

For more information about the method used in the calculation of the FIBA World Ranking Men, please refer to the “How It Works” section.