The February World Cup qualifiers windows have shaped the latest edition of the FIBA World Ranking Men and the biggest change in the Top 20 standings has been the rise of France over Slovenia in the 4th place.

France completed its February run with two victories against Portugal to seal its ticket to the second round of the Qualifiers and swapped places with Slovenia which went 0-2 against Finland in the recent window.

Besides Les Bleus, Greece has overtaken Italy for the 9th spot of the ranking, after sweeping Turkey in two games, while Brazil has climbed to the 14th spot.

Check out the FIBA World Ranking as of March 9: 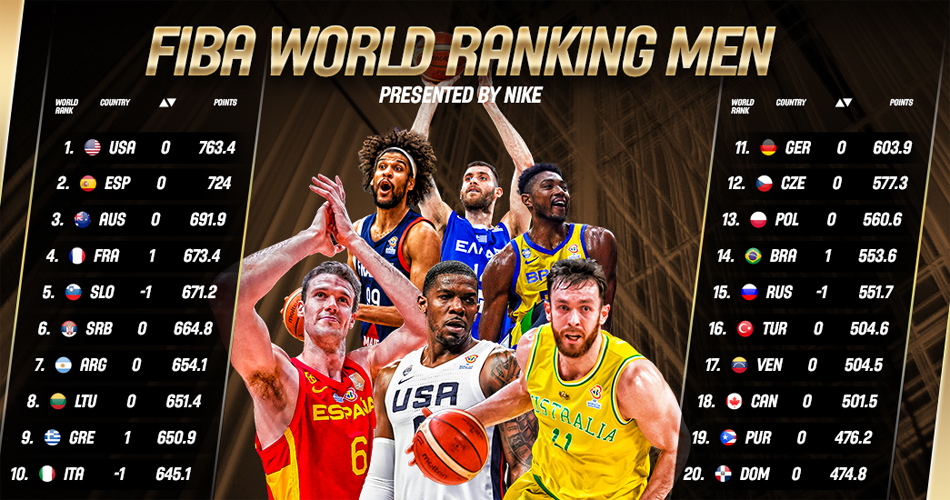 The second window of the FIBA Basketball World Cup 2023 Qualifiers featured plenty of exciting storylines as national teams from across the globe continue their battles for a spot in the 32-team field at next year’s spectacle to be staged in The Philippines, Japan and Indonesia.

Results from the Qualifiers have led to some changes in the latest FIBA World Ranking Men, presented by Nike, on all continents. In Europe, France, Greece, Iceland and Georgia are moving up; South Sudan, DR Congo and Senegal in Africa; Brazil in Americas; Kazakhstan and Lebanon in Asia.

France back in the top 4
The most recent World Cup 2023 Qualifying Window brought one movement in the top five. France swapped spots with Slovenia, going from five to No. 4 on the back of their two wins over Portugal – 94-56 at home and 69-56 in Portugal. Those two victories secured Les Bleus’ qualification for the Second Round of European Qualifiers. Slovenia meanwhile lost twice to Finland, 86-76 on the road and then 83-79 at home.

The other change in the top 10 saw Greece move ahead of Italy for the No. 9 spot. The Greeks came up with two wins over Turkey – 72-71 at home and 76-67 in Istanbul – while Italy suffered a double-overtime 107-105 defeat in Iceland before bouncing back for a 95-87 victory at home over the northern Europeans.

Iceland’s historic win over the Italians saw them jump two spots to No. 44 – with Georgia the other larger European nation moving up two spots, jumping to No. 36 after defeating North Macedonia twice.

Brazil is moving up
South America’s second-best team Brazil made a one-spot jump to No. 14 after knocking off Uruguay 85-66 and Colombia 119-73 – both games at home – to lock up a spot in the Second Round as well.

South Sudan is a rising force
The biggest mover in the men’s World Ranking was South Sudan, who had a World Cup Qualifiers debut for the ages with wins over Rwanda (68-56), FIBA AfroBasket 2021 champs Tunisia (72-64) and Cameroon (74-68) in the window played in Senegal. That performance saw South Sudan jump six spots to No. 76. Congo DR also jumped multiple places, rising two spots to No. 79 after beating Kenya 66-56 and Senegal 62-57 before losing 62-51 to Egypt.