Will Clyburn: I’m shooting for winning and a retired jersey

Will Clyburn talked to Eurohoops about getting back to form after the torn ACL, the “EuroLeague or bust” pressure with CSKA Moscow and the one goal he has for the future.

Final Four MVP, EuroLeague champion, member of the All-EuroLeague First Team and a universal recognition for being one of the most versatile, elite players in the continent. CSKA Moscow high-motored star forward Will Clyburn has accomplished a lot at 30 years of age and there are a few terrains left unconquered for him.

If there’s one endgame goal that he’s looking to achieve is to keep winning so that he ultimately sees a club retiring the jersey with his name when all is said and done.

“If I can finish my career here, win more titles, then, I guess my ‘dream’ is to get my jersey retired somewhere. I guess that’s my next final goal. That’s kind of what I’m shooting for now: Winning and a retired jersey,” Clyburn told Eurohoops in a live interview.

Clyburn made his comeback from a torn ACL in a resoundingly strong fashion. In just his third game of 2020-2021 he put on a big-time performance that included the winning play in a road victory over Fenerbahce Beko. It was a resounding statement by him that he left that serious injury blow – one that hit him a few months after his crowning achievement in the 2019 Final Four – way behind. As if it never happened.

Now, and through 11 games of the current EuroLeague regular season so far, Clyburn is averaging a career-high 15.9 points to go along with 4.4 rebounds.

“Obviously, going down with an injury like that is always tough. You have your doubts: ‘Am I going to be the same?’. You have other people thinking: ‘Is he going to be the same guy?’. The only thing you can really do is work. That was basically what I did,” Clyburn said. “I had a great staff with me here in Russia and back home. Everyone played a part in me getting back to where I was. And just getting comfortable I think that’s the biggest thing coming from an injury like this: Finding a way to find yourself to get comfortable, Once that happens, its’ like riding a bike from there. And I don’t think anyone forgets how to ride a bike.”

It was the EuroLeague opener vs. Barcelona and his return to the competition after that night of October 25, 2019 vs. Alba Berlin when he tore his ACL, that Clyburn describes as a “wake-up” call that further pushed him towards stepping up his efforts to reclaim his form.

“I want to say that the biggest thing to me, the biggest wake up call, after I returned was the first game against Barcelona. Obviously with the COVID-19 going on we couldn’t have a regular preseason with tough games. We were playing teams that weren’t as talented or physical as Barcelona. After that game, it was like a wake-up call. It was “OK this is how EuroLeague is played” after being out for so long. My body was hurting, I was a step slow. But we all expected that, we all expected that I wasn’t going to come back normal right away. That I’m going to need some adjustment period.”

“I had nothing like that physicality [vs. Barcelona]. Ever. Everything played a part in that game,” Clyburn added.

In a conversation during the most recent Eurohoops Live Show, Clyburn discussed his team’s six-game winning streak, finding chemistry after having more players practicing together, the summer signings of Tornike Shengelia and Nikola Milutinov, the “must-win” pressure that he loves with CSKA and more.

Here’s what Clyburn said on:

“Everybody had a part in that play. If it weren’t for Niko [Milutinov] getting that tip like that, we’d never get that shot off. Dani [Hackett] having the wits to throw me the ball right away but I knew that in the position I was there was no way I could get a good shot off. Mike was coming towards me, he was open and everybody knows he wants that shot, he wants to be that guy. No better person to shoot that shot at the end of the game.”

EuroLeague captains picking him as the player who will come back hungrier than anyone else:

“I had to say me. Just because I was away from the game, the injury was October 25th. That was a long time to be away from the game. I just wanted to be out there so bad. Even before the COVID-19 happened, I was joking with my staff about coming back for the Final Four if we made it. I just wanted to be out there with the team. That was what drove me the whole time during the summer. Just trying to get back to normal. And try to be back with the team and help the team as much as I could.”

To have that injury after the best year in my career… it hurt a lot. Just because for that reason. But yeah, I’d agree with everybody.” 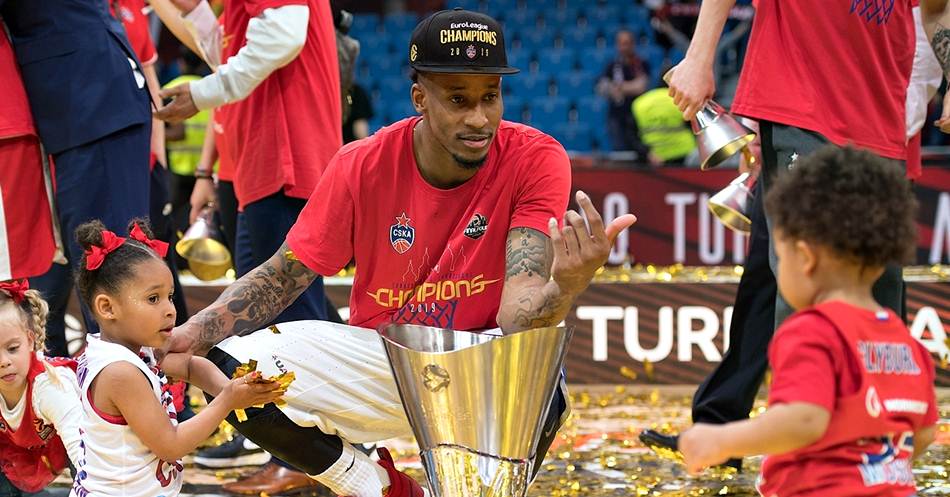 Yes [I agree]. Since I came here they told me that the moment you put on this jersey, the pressure is on. That’s the first thing the players told me. And they are right, it’s EuroLeague or bust. There are so many high expectations here. We know what this team has and what they provide for us. I want to say that this is probably the closest organization to an NBA organization that you can get. And it’s expected to win. You have everything, everything is taken care of and the only thing you have to worry about is playing basketball and winning. And the legacy they have here… second place is not an option. You don’t get any congrats for the second place here. It’s either win or it’s a failed season. Some people learn to appreciate it here, for some it takes a while to get adjusted. It is what it is. When you come here you have to be prepared for that, for that role.

Well, that’s the goal. When you are playing basketball at this level, the goal is to win. You don’t want to be in no other situation where winning isn’t the goal. I don’t know if you really want to even play if winning isn’t the goal. Having everybody here at the same page… Win or bust. Because you know that’s everyone has that goal and everybody is going to ride the train until the end.”

The summer additions of Tornike Shengelia and Nikola Milutinov:

Niko is a big guy. We all knew what he did on Olympiacos. To play with that kind of big is exciting.

“It’s going to be funny. I never actually thought that we’re going to play against each other in Europe at all. It’s going to be different and it’s going to be exciting. It’s once in a lifetime. You couldn’t dream for something like this and I’m glad we have the opportunity to do this.

I’m pretty sure the closer it gets to the game, maybe some words will be said. We’ll send a text or two. Hopefully, we’ll keep it PG-13. Hopefully. ”

The advice that he would give to players who aren’t picked in the NBA Draft, being himself a previously undrafted player who went on to have successful career:

“It’s basketball all over the world. That this is not the end of the road and they need to have the same mindset. Obviously, as an American when you’re growing up you don’t think that you are going to go play overseas, the dream is to play in the NBA. But they need to realize that there are so many other ways to get to that goal. There’s so much life experience you can have when you take this route. You get to see the world. I think people need to keep that mindset and be open-minded about coming over here and just enjoy the process. Not just coming over here and playing basketball. But also enjoying Europe, the people, the, food, everything. Because this doesn’t last forever.

Basically: Just be open minded and continue to chase the goals on basketball no matter when you are playing at.”

His one unfulfilled dream:

“I really don’t have one. In that one year (2018-2019) I probably accomplished just about everything I could, in one season. If anything I can possibly say and it’s like a huge dream of mine but maybe it happens, maybe it doesn’t. But… If I can finish my career here, win more titles, then, I guess my ‘dream’ is to get my jersey retired somewhere. I guess that’s my next final goal. That’s kind of what I’m shooting for now: Winning and a retired jersey. Obviously, if I want to finish my career here (with CSKA), then probably yes that would be the goal [here]. If it happens, I’m not sure, that’s a goal that kind of keeps me going”

The favorite thing about his head coach Dimitris Itoudis:

“It’s a lot. The way he talks, his sayings, he has a lot of good sayings. But it’s probably when he’s really upset during games and he’s switching from Greek to Serbian. He switches back forth and it’s just funny how he goes back and forth. Seeing how animated he is on the sidelines, you can never get enough of that because he’s so into the game and so intense. And, obviously you can tell from that animation that he wants to win. That’s what he wants to do.

Just seeing him on the sidelines reacting to basketball stuff, is probably the funniest thing about him, maybe. He’s theatrical when something crazy is going on. That’s him. I’ve been with him a couple of years now and I’ve learned to enjoy it and laugh at it. It just shows how much he cares.”