Eurohoops interviews Vrenz Bleijenbergh, the new European Unicorn that bet everything to become a pro.

The first time I heard the term “Unicorn” to refer to a basketball player was when Kevin Durant described Kristaps Porzingis’ genetic freak. A tall player, with long arms, shooting ability, and quickness that is far from the classic player prototype.

Vrenz Bleijenbergh (Belgium, 2000) is one of that kind. This 6-foot-10 forward that prefers playing at the point guard position aims to be selected in the 2021 NBA Draft while advances into his third pro season with the Telenet Giants Antwerp. Eurohoops spoke to the prospect after his first year in the EuroCup.

– First of all, how’s the season going for you and Antwerp?

I think my season is going very well. I improved my game and worked a lot during corona time. I became much stronger and practiced a lot on my game. As a team, we didn’t do what we wanted. We only won one game and it wasn’t enough in a tough league like EuroCup. We threw some games away. Personally, I’ll say I did well in Eurocup but I think I can do much better. I have played in the Belgium league, FIBA Cup, and BCL and I’ve always showcased my progression and how competitive I am.

– Did you expect EuroCup to be such tough competition?

I knew it was a tough competition. I watched it a lot when I was younger when I didn’t play at this level. I was really ready for it.

– The vision we have for Belgian clubs is that they are “specializing” in developing young prospects. Do you feel the same?

I see some young prospects coming to Belgium to get some experience so I think you are right. It’s a great development league in my opinion. And now with the BeNe League [Editor’s note: the professional basketball league that will unite Belgium and Netherlands’ first tier and will start in the 2021–22 season], it’s going to open doors for more players to come to compete here.

– I read that you bet everything to become a professional. You had a good hand, as there are not many players with your height who can dribble the ball. Actually, they don’t even play as small forwards...

I wanna push myself to the limit and get as high as possible. I don’t want to regret not having bet on myself. I think I have what it takes to be at the elite level. My strengths are being a great facilitator on the court creating for my teammates and the ability to defend all positions, from 1 to 5. With the court vision I have, I really like to play with the ball in my hands.

– I imagine that, at one point in your childhood, you were asked to play power forward or center because of your size…

I always played as a point guard in the youth divisions because I have a great court vision. As I am, 2.08 a new coach wanted to put me on the 4 position. As a stretch 4 because I have a good shot and I can attack the basket. But it was not the best spot for me. I rather play in the 1 / 2 position. 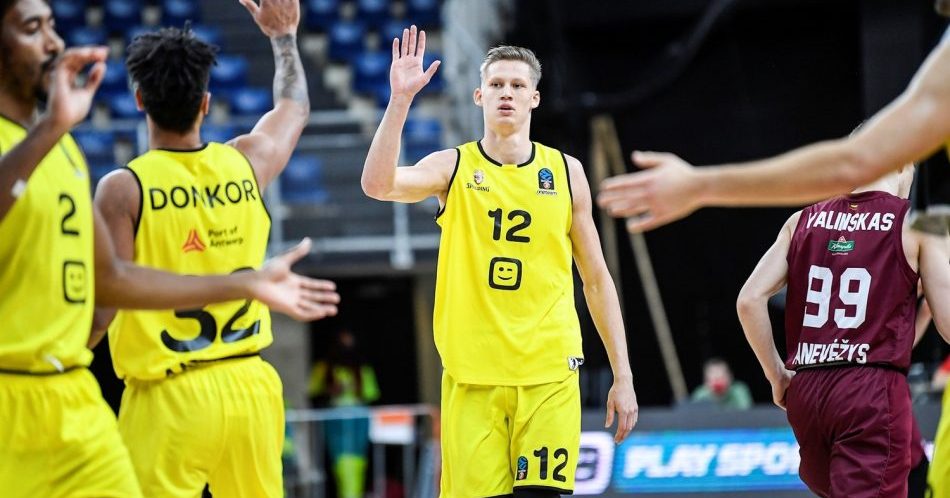 – This is your breakthrough season. What we can expect from you from now on?

I will put everything on it to get drafted, I’m working really hard. I think I really proved in the EuroCup that I can play high basketball. I’m really working to be a first-round pick and I think I have the potential for it.

– Let’s continue talking about the 2021 draft. Probably the most important moment of your career is about to come…

I’m really going as an underdog into the draft. Maybe I’m really under the radar but I proved and will prove myself in the future that I can play on the highest level.

– What aspects of your game are you trying to develop? Do you pay special attention to any player to improve your game?

In previous years I was really working on my body. Like last year, when I gained more than 15 kilos. Now I’m trying to perfect my game. As I said, I really wanna play the 1 / 2 position so I’m working daily on my ball-handling and my pick and roll game.

– Is the NBA where you are focused or do you have more challenges to face in Europe? Maybe in the EuroLeague?

– As a Spanish editor, I need to end this interview knowing what happened two summers ago. Barça was close to signing you… but you decided to go in another direction.

It was a tough decision because Barça is a great club. It is also a goal to play for them but at that point, I think it was better for me to play on the highest level in Belgium, work with my physical coach who helped me a lot, and had everything planned with me.