Facundo Campazzo: I was obsessed with making it to the NBA, but not anymore

Eurohoops chats with Real Madrid’s key player this season, Facu Campazzo, who opens up about everything before the Final Four in Vitoria-Gasteiz.

The 28-year-old Argentinean seems to be at the best moment of his career, being a pillar for Real Madrid throughout the season and especially in the playoffs sweep against Panathinaikos. Still, as he reveals to Eurohoops, he is not “obsessed” with the NBA as he used to be in the past, even though he is in the radar of many scouts.

Facu Campazzo: Hopefully. The truth is that I wanted to have a month like that. I dropped my level in January, February. I wasn’t playing well and couldn’t play my style. In April I was able to raise a little, I started to get confidence. I think the team helped me a lot in that sense, the coaching staff gave me that confidence too. I played much quieter. Above all things, we were able to win, we could qualify for the Final Four, which is extremely important. The Euroleague and League MVP awards are an accident of what happened. It is something secondary. We reached a very difficult goal qualifying for the Final Four after such a long season.

EH: Especially, because the playoffs start very rugged. Sergi gets injured, you remain as the only pure point guard available for Pablo Laso, Panathinaikos comes after a very good run and everyone talks about how dangerous Calathes is. Do you face it almost as something personal?

FC: No, no. If I took it personally, I was going to lose. Although Calathes was the player to defend, we knew that Panathinaikos went beyond Calathes. When he plays well the team plays very well, but they had backcourt danger and a very important frontcourt danger that we had to take into account. We scouted them in the best way and I think we understood that message from Pablo at the time of playing. We understood it very well and we applied very well what we had been training.

EH: These playoffs consecrated you as one of the best point guards in Europe but when you arrived in 2014, you barely had minutes. For what you felt during training, when you played… did you think you could reach this level of game?

FC: No. But I didn’t think about it either. I was just thinking about playing basketball, I’m happy inside a court. I consider that a player progresses when he has minutes. The first year I had a low average of minutes and it wasn’t what I was used to in Argentina. I wanted to play, I wanted to feel responsible, with pressure. I had two years in Murcia earning that confidence and showing that I can be at the level of the league. I also got to know the European competition, the EuroCup in this case. I returned to Madrid being a much better player 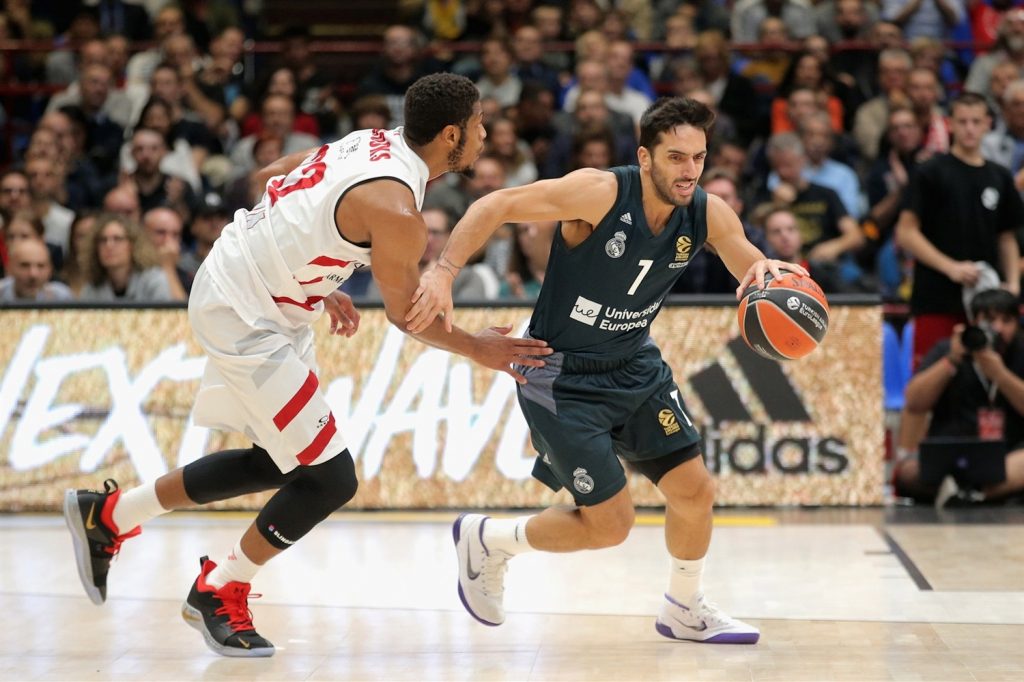 EH: In that first season, you didn’t get minutes in the Final Four. Last year you arrived in Belgrade after an injury, you could barely play 15 minutes and your role was defensive. I remember you especially in the semifinals, defending Sergio Rodriguez… Do you think the Final Four owes you something?

While we win it, the Final Four owes me absolutely nothing (laughs). When you are playing a final, the personal becomes secondary. You do what the team really needs. In my first year, I didn’t play. It was my first year, I had ‘Chacho’ and Sergi ahead of me and I understood that role… but I celebrated it as if I had played 40 minutes. The second Final Four was played when I got back from an injury and I couldn’t have done more than what I did. My job was to defend and that the point guards of the rival team didn’t do their job. And I felt good, I felt important, I felt that I had good minutes… and we won. What the Final Four gives you. We come with a very good dynamic and we know the roles within the team, so anything can happen. We are all pushing to the same side to trying to get that title so longed for.

EH: I know that if I ask you about a hypothetical final against Fenerbahce…

FC: No, you can’t talk about that. Cross out that question (laughs).

EH: You’re just going to talk to me about CSKA. Therefore, I would like to know how a final is prepared. Do you go to Vitoria studying all three teams in case you play against any one of them or you just focus on CSKA?

FC: We only focus on CSKA, in this case and last year. You only think about that rival. There is no tomorrow, there is no Sunday. It is only Friday, at that time, with such players and against such players. To defend in such a way and to attack in such a way. There is no tomorrow. If we win, there will be time to think. Also, we know the two rivals, both Efes and Fenerbahce. We faced them twice during the regular season and we know the players, how they play. But in our head, our study is 100% and mentalized 100% on CSKA.

EH: I know it’s a very recurring question but do you understand that you inspire thousands of children who believe they can’t be professionals because of their height?

FC: I don’t think about it but for the simple fact that I don’t realize what you really tell me. I know there are shorter kids who love basketball and maybe they see me playing, fighting, clashing and they have that inspiration. It gives me the motivation to continue showing that they can play, that anyone can play. Although one is used to seeing players of 2 meters tall, of 1’90… or even more, the “shorter” can play and can compete at any level.

EH: I remember Gustavo Ayon after a great game telling us that one of the keys was that he had changed his eating routines and that it was “your fault”. That many in the locker room had tried to change the way the eat following your example. How important was that change for you?

FC: I don’t want to say that he gave me everything because he would also underestimate my talent, but it helped me a lot to realize which is the way to compete. It helped me a lot to raise my roof, although I don’t go putting it in the head to everyone that they have to eat well. It happened to me when I didn’t have those habits. I saw Manu, ‘Chapu’, Luis and Pablo eating well, training well, sleeping well and they were like motorcycles. Like some horses running during the entire training, playing in the best way. And I say ‘well, if they do it, there’s a reason’. So I started doing it. Personally, it helped me a lot in the physical aspect, in the mental aspect and in the confidence. It’s a circle that took me to my game.