Kostas Sloukas: I feel like this is my first time in the Final Four

Eurohoops chatted with Kostas Sloukas a few days ahead of the Final Four and he opened up about Zeljko Obradovic, Fenerbahce’s organization and fans, while he also picked his MVP of the season!

A few days before Fenerbahce Beko faces Anadolu Efes in the first all-Turkish semifinal of the Final Four history in Vitoria, Eurohoops chatted with Kostas Sloukas on the upcoming event and more.

The Greek guard opens up about his relationship with Zeljko Obradovic, how Fenerbahce Beko will outsmart “talented and dangerous” Anadolu Efes, plus many more.

Eurohoops: Congratulations for the Final Four, huge success. You’ve had a few problems this year especially in key games. So how is this different compared to other years’ Final Four achievements of yours?

Kostas Sloukas: First of all I don’t try for excuses, this is the mentality of the coach, the club and my teammates. Injuries are part of the game, we continue to play and we’re very happy to go to the Final Four. Now our expectations are big. We have to fight because we play against a very good team. They are very talented and dangerous.

EH: What would you like to say about the main absences?

KS: I told you, no excuses. We have to fight more than any other time. We have to follow the coach’s instructions and plan because he always has the way to win even like this. So, this is the most important. We also need luck for this kind of games and I hope it will be on our side. 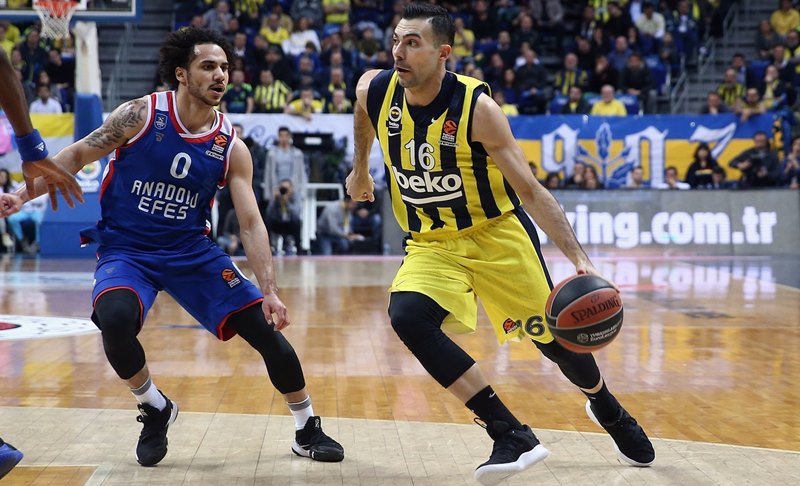 EH: You’ve had an amazing season, people consider you as the leader of Fenerbahce and I believe that’s the first reason you came here at the first place, to become a leader and be successful. Am I right?

KS: It’s not exactly like this. I came here because I’m an ambitious guy. I like to be in successful teams and to work very hard. I came to work with the best coach, with good teammates and a very organized club. I’m very happy to be here. I don’t think like that [about being a leader]. All of the players do a great job, they have their roles. I agree that my coach and my teammates trust me more and I’m not afraid to take responsibility. Sometimes I do the right thing, sometimes wrong, but the most important is that everybody sticks together.

EH: Coach trusts you a lot. In many press conferences, he praised your game. So how it feels like for you to receive these comments from a legendary coach like Zeljko Obradovic?

KS: First of all, I like working with him, even if sometimes he’s very aggressive. He’s a very honest and straight-forward guy. This is his way, I know. I’m very happy that I work with him and this kind of teammates that I have. From my side, I try to do what he wants from me in the court. At the end of the day, he is sure that I give everything that I have for the team and to win. As I said, I’m ambitious and competitive in every game.

EH: In the semifinal you are going to face Anadolu Efes, a team that you know very well and they also know you very well. What would you like to say about them? Are you surprised that they made it to the Final Four after finishing last season at the bottom of the standings?

KS: No, for me it’s not a surprise because Efes plays very good basketball throughout the year, from the beginning until now. They have talented players and a respectful coach. It will be very hard to beat them in the semifinal. We have to fight and we have to control the rhythm of the game.

EH: By controlling the rhythm you have to focus on their guards in particular. Vasilije Micic has a very good season, Shane Larkin is playing really great, Rodrigue Beaubois, Dogus Balbay, they are a really talented backcourt but you also are one. What do you think about this battle of the backcourts?

KS: Our position is really crucial for the team. We have to be ready, they will be for sure, for a tough game. Bobby and I will do our job for the team. I have to be concentrated for 40 minutes.