Dallas Mavericks star, Kristaps Porzingis shares his point of view on being in quarantine through the “NBA Together” campaign.

Kristaps Porzingis participates in the “NBA Together” campaign. A global community and social engagement campaign with teams, players, coaches, and others across the NBA that aims to support, engage, educate and inspire youth, families, and fans in response to the coronavirus pandemic.

“I try to do what I can. I have a little room with a lot of the stuff that I use to stay in shape,” said Porzingis regarding on what he’s been up to while in quarantine, “I have a little weight room here, a bike and stuff so I can do some cardio and I do a little bit of boxing, I try to work on my boxing skills, too. We don’t know when we’re going to restart everything so I’m just making sure I do the max I can to stay in shape and stay ready.”

“I’m trying to build up the patience to read. That’s been something that I’ve had trouble with, but I think I’m getting better [at] reading books,” he added on some hobbies he’s trying to pick up with all the extra time, “I love boxing, I’ve always been a big fan of boxing and martial arts, so I’m keeping myself entertained and doing a little bit of that myself here at home. Just little things that I like and I’m a YouTube guy, so I’m on YouTube just watching videos and learning new stuff. Like I said, just trying to keep myself busy.”

“I’ve always been a big fan of Mike Tyson,” the Latvian big said focusing on his love of boxing and mixed martial arts, “Also now with the MMA scene growing and Conor McGregor making it a mainstream sport, I also became a big fan of MMA and that’s something I would also love to work on a lot in the offseason once I’m not playing. So, we’ll see. I don’t know when, but I’ve always been interested in combat sports.”

“They made a plan for us,” he said replying to a question on what the Dallas Mavericks trainers have done for the team in quarantine, “We have an app that we can go on and we can have the workouts there and we don’t really have to do anything, we can just follow the workout and do our work and they made it really simple for us. I’m just doing what I’m supposed to.” 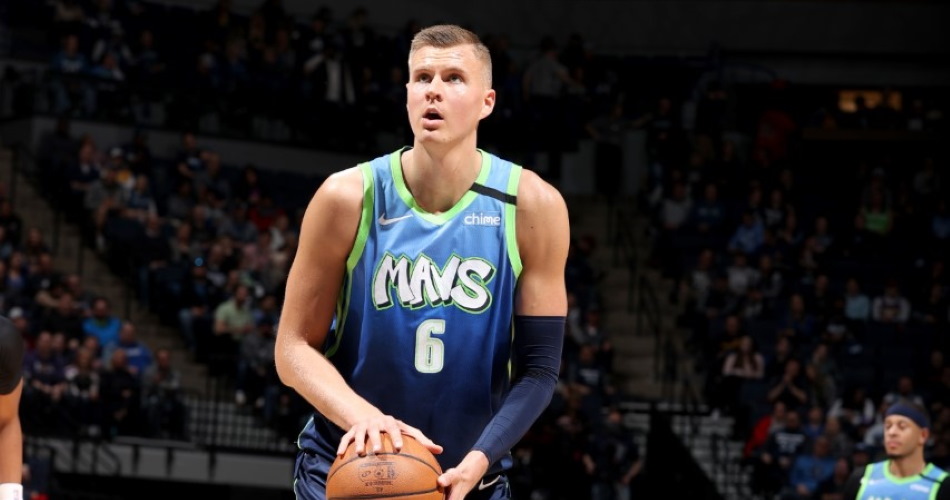 The 24-year-old forward/center also discussed keeping in touch with his teammates during the hiatus. “We have the group chat going on. We pretty much text each other daily. Everybody’s bored”, he mentioned, “I think we’re going to have a group call tonight as a team also. I’m sure that will help us keep our spirits up.”

“Just his presence in the locker room and around the team. Everybody loves him,” he added remembering being teammates with Dirk Nowitzki, “Just to see his energy and see his passion still and motivation at that age, at that point in his career, still putting in the work before practice, it was pretty crazy to see, actually. That just shows what type of person he is, what type of work ethic he had throughout his career. It definitely gave me more motivation, more hunger to keep working and to try to emulate things he’s done in his career to be such a great player.”

“It’s a tough situation, and I don’t understand a lot about what’s going on. But what I can say is it’s important for people to just follow the guidelines,” he pointed out commenting on the coronavirus pandemic in Spain, “Whatever people that understand this whole situation are telling you to do, that’s what we should all do, and I think that’s going to help us beat this situation or get past this situation as fast as possible. For the people of Spain, stay strong and make sure you do the right thing.”

“We all were kind of in shock,” he took out of the Mavs reaction to the news during the game versus the Denver Nuggets, “At that point, I didn’t realize the magnitude of this whole situation. It was kind of a shock.”

“We have a great leader in Mark who’s pushing all of this, who’s making sure people around us are taken care of,” he said on his team’s owner, “That’s what he does and I think that’s why the city of Dallas loves him so much. And I’m sure we’ll keep doing good stuff for the people around the organization and in the city.”

“The situation in Latvia is good,” he went on regarding his native country, “I’m making sure daily that mom and dad are good and just away from people and make sure they stay safe. We stay in touch every day. I miss my family, miss my parents. Hopefully, I get to see them soon.”

“Probably just playing at home, playing in front of our fans again and having fun out there,” he added on what he’s most excited to get back to when things are back to normal, “I feel like I and Luka were really getting in a good rhythm playing with each other right before this whole thing happened and hopefully, we can get back to that as soon as possible.”