Entered in the NBA Saturdays and NBA Sundays presented by NBA 2K23, 47 games will air in primetime in Europe. Giannis Antetokounmpo and the Milwaukee Bucks, Luka Doncic and the Dallas Mavericks, Nikola Jokic and the Denver Nuggets, Stephen Curry and the Golden State Warriors, and LeBron James and the Los Angeles Lakers, have all been placed on the primetime schedule, just to name a few NBA stars. 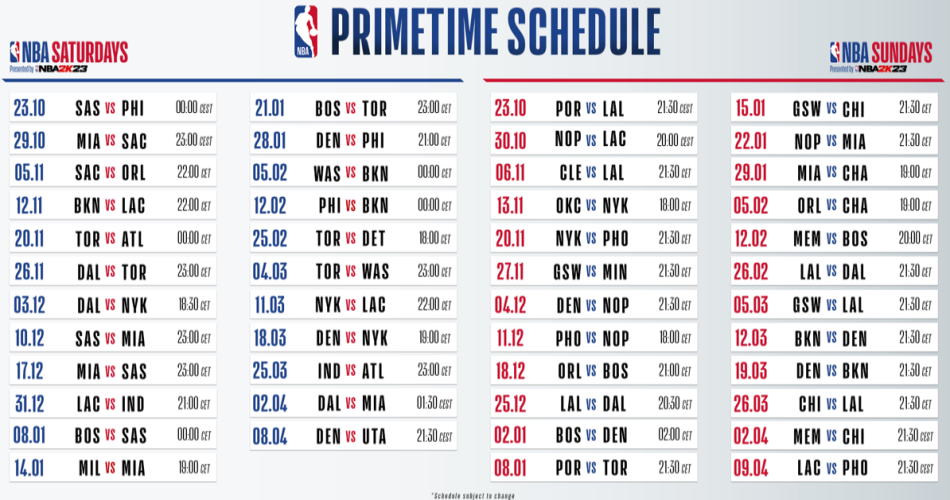 “Scheduling weekly games in primetime for fans in Europe, the Middle East and Africa is a critical component of our efforts to make the excitement of NBA basketball more accessible to casual and hardcore fans,” said NBA Senior Vice President, Head of International Content Partnerships Matt Brabants. “Over the last ten years we’ve seen a tremendous response to this initiative from fans across these regions, and with the quantity and quality of talent from Europe and Africa in the NBA at an all-time high and weekly appointment viewing in primetime, there has never been a better time to be an NBA fan in Europe, Middle East and Africa.”

Besides the listed contests, more regular-season content on European-friendly tipoffs, including the NBA Paris Game 2023 between the Chicago Bulls and Detroit Pistons at Accor Arena on January 19 along with the top end of the Christmas Day schedule and plenty of action on Martin Luther King Jr. Day.

NBA games and programming are available in 214 countries and territories in more than 50 languages.