The world of basketball is big, and it features many different cultures. However, one thing that has always taken basketball by storm, and even more so now, is fashion. Sneakers are a big part of that.

Many players discover a love for collecting and trying out a wide variety of shoes on and off the court. Zenit Saint Petersburg center Andrey Zubkov is one of them.

The 29-year-old has been collecting sneakers for the past five years and is looking forward to seeing the European sneaker culture grow and reach the next level.

Perhaps, he’ll end up being the first-ever EuroLeague sneaker king, who knows…

– When did you start collecting shoes and why?

I can’t say I started collecting a long time ago. I just liked this culture, paid attention to it when I was watching basketball and videoclips on TV. Until 18 years old, I lived in Chelyabinsk. It was hard to find something there and I didn’t have a lot of money. I started collecting a little when I moved from there. And when I started to earn money, all this started for real. I think that I’ve been doing this for the past five years, collecting what I like.

– What’s the biggest price you have paid for a pair?

I paid 1,500 dollars to get a pair of Nike SB Dunk Low Ben & Jerry’s Chunky Dunky. I fell in love with them and really wanted to buy them. By the way, after this, I changed my mind about the Dunk SN series. Now, I’m a fan of this model.

– Do you consider this also as an investment? Would you sell any pieces of your collection?

No no, I’m not considering it as an investment. I won’t sell my sneakers to anyone, maybe only at charity events. I’m collecting all this just to give joy to myself when I wear them. I don’t have pairs that I don’t wear. I wear them all. I have lots of pairs I still haven’t worn, but it’s just because there wasn’t an occasion for them. And I still have this feeling, when a new pair arrives, I always want to put them on and go somewhere.

– As a EuroLeague player, do you get any special perks from shoe companies that help you grow your collection maybe with shoes that are not sold in a shop?

I don’t have any contact with any shoe company. From time to time, guys from Nike send me something like friends, but it’s not a sponsorship, it’s a friendship. I also have a couple of people who help me to get something. I just tell them what I want and they try to find it; most of the time they succeed. If somebody is ready to send me new pairs, I would receive them with pleasure (laughs).

– Being in Russia makes things easier or not for your collection?

I hate to say this, but yeah, living in Russia makes it much harder, or even impossible, to find something. It was that way for a long time. Now that we all have internet, it’s easier, though I still have to spend some time finding particular pairs. When I went to the States twice, each time I brought back around twenty pairs with me. It’s totally on another level; shops there seem like palaces with sneakers. Maybe it’s for the better because if I had the same in Russia, I would run out of room very fast. 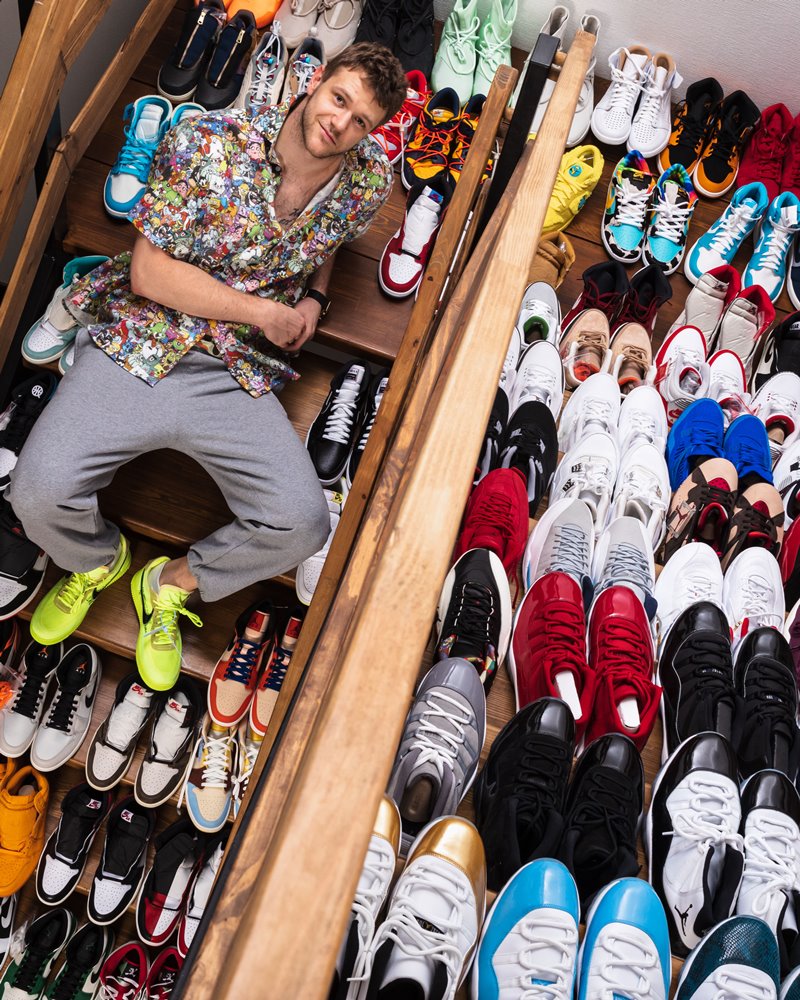 – What’s the rarest pair of shoes that you have?

I can’t call myself a collector of some rare pairs. I think I’m just a man who likes sneakers a lot. There are ones that were sold out right away in the beginning, and it’s hard to get them, but they themselves aren’t rare. Recently, I bought a pair of Zoom BB IIs released in 2009. It has been one of my favorites that I saw on players. Now, it’s almost impossible to find, but I got one.

– What do you think is missing from European sneaker culture and you would like to see and be a part of?

I think in European culture there aren’t enough people personifying sneakers culture. In the USA, people who know a thing or two about sneakers are very known. Though, in Europe, it’s getting more popular, too. More people are playing in notable sneakers and colors; more people make customs and unique paintings. The media is starting to pay attention to it. Maybe soon in Euroleague, there will be a prize like in the NBA, which is the NBA Sneaker King.

– With Zenit making a splash in the EuroLeague, we have to ask: Is it the shoes?

(Laughs) Good question. I could have said that it’s all because of sneakers since I started to wear the new ones for every game. But no. This year in Zenit, we have a good team, good chemistry, everyone is dedicated. The coaching staff and the bosses worked a lot to get us together, they did everything for us to play in this difficult season. And we try to play our best in every game and in every practice, so there’s a result.