Lokomotiv is paving the way for Russian basketball’s next generation

Russian basketball has certainly seen its fair share of glory days. Dominant clubs with big aims and marquee players have stood tall in both the Turkish Airlines EuroLeague and 7DAYS EuroCup, winning nine titles across the two competitions in the last 15 years and finishing as runners-up six more times.

In recent years, however, we haven’t heard a lot about young Russian prospects, but EuroCup power Lokomotiv Kuban Krasnodar aims to change that narrative.

Lokomotiv made a conscious decision to shake up the status quo with the incorporation of six young talents into its squad for the current EuroCup season.

The project started during the previous season, but it didn’t come to life overnight. Lokomotiv has been nurturing prospects for years in its youth system, waiting for the right moment to incorporate them into the first team. 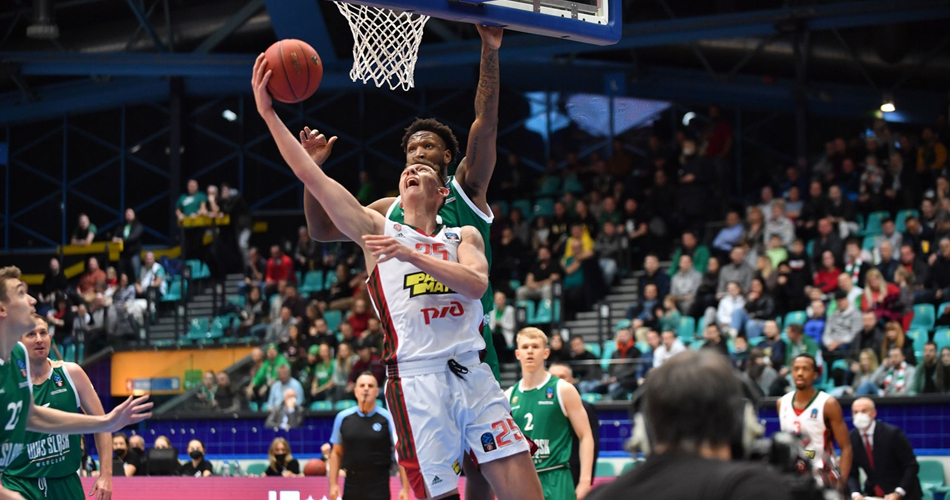 Such is the case of forward Andrei Martiuk. The 2000-born prospect joined Lokomotiv-2 in 2018 after growing up with the junior squad of Ukrainian side BK Dnipro. Martiuk made his debut with the first team last season and has been on the rise since. After a slow start in the current campaign, when he only played for a few minutes in the first two contests, he had his breakthrough moment against Boulogne Metropolitans 92. Martiuk scored 15 points along with 6 rebounds for a PIR of 22, all highs for his 20-game EuroCup career.

By the looks of the roster, depth has been a question for Lokomotiv this season. On one hand, there are established superstars in Errick McCollum, Johnathan Motley and Alan Williams. On the other, there are several young players with limited EuroCup experience. But somehow, there is balance.

Another example is guard Zakhar Vedischev, who has seized his chance to shine in a loaded backcourt. A product of the Lokomotiv-2 squad, Vedischev, who is also the son of club president Andrey Vedischev, has a rich CV already. He started playing basketball in Florida with Montverde Academy in 2017 before returning to Russia to join the second team. His debut in the main team followed during the pandemic-shortened 2019-20 season, then the guard moved to Utah State University in the NCAA. Now he’s back with Lokomotiv for his second EuroCup season. This one started with the best omens, when Vedischev poured 14 points while making 4 of 6 three-point shots in his season debut, a win over Slask Wroclaw.

Head coach Evgeny Pashutin definitely has an eye for prospects, and the Lokomotiv organization has been totally supportive of his picks with a look-ahead to the future of the club and, ultimately, the future of Russian basketball. It’s no wonder that Loko has also signed forward Sergey Dolinin (born in 2000), guard Vladislav Emchenko (2000) and center Valerii Kalinov (1999) to long-term deals.

Emchenko found himself taking a key role in the season-opener when he played for 23 minutes in a win over MoraBanc Andorra. He produced 7 points and was a key part of Pashutin’s defensive plans. Already, the young guard is making great progress and, to his credit, he is a valuable substitution when Lokomotiv needs energy on the court. While the rest of his teammates are enjoying a break from EuroCup action, Emchenko saw his hard work paying off as he was selected in the senior Russian national team for the November World Cup Qualifiers for the first time in his career.

And there’s more that Lokomotiv’s youth plan has yet to give the senior team. Both Dolinin and Kalinov joined the second team in 2018, with slightly different management.

Dolinin had started his playing career with the U18 squad of CSKA Moscow. This is actually his third EuroCup season, although we haven’t seen him taking much time on the floor yet. So far, he’s more active in the VTB League. Similarly, Kalinov has only taken part in two games with limited time, given Johnathan Motley’s breakthrough season and the return of Alan Willams to the squad.

Sasha Shcherbenev is another intriguing addition for Lokomotiv this season. The 2000-born guard landed in the second team at 16 and even made his professional debut with the first squad at 17. After parting ways with the club for two seasons, when he played for Spartak and Yekaterinburg on loan, he returned for the 2021-22 campaign and has participated in four games in EuroCup. His biggest contribution came in the victory over Slask Wroclaw, where he picked up 7 rebounds and scored 3 points in 15 minutes.

So far, Lokomotiv’s youth movement is paying off. The team sits second in EuroCup Group A, sharing a 4-1 record with Joventut Badalona – which, interestingly, is another club that puts a lot of focus on its young players.