McGee, Burgos getting the season back on track

Protecting home court to start the Basketball Champions League Play-In series versus Darussafaka was the latest task completed by Hereda San Pablo Burgos. It has been a challenging season so far, especially at the domestic level, but the successful first step in the second opportunity to advance to the BCL Round of 16 puts smiles on the faces of the Burgos team.

“It was the most important thing for us,” Tyrus McGee told Eurohoops on the importance of taking the lead, 1-0, in the best-of-three series, “We owed it to our fans because we let them down a few times this season, and we intend to own that same mindset every game going forward.”

McGee, 30, scored a team-high 12 points going through foul trouble in Game 1. He joined Burgos during the offseason carrying the experience of 43 BCL games between Hapoel Holon in 2020-21, Elan Bearnais Pau-Lacq-Orthez in 2019-20, and Reyer Venezia in 2016-17.

His fourth BCL team overcame a sluggish start Tuesday evening. The visitors jumped to an early 13-point lead and did not let go until the final minute. Recent addition Hayden Dalton breaking the 78-78 tie with a crazy four-point play made the difference.

“I am feeling more comfortable on the team,” said the former Nymburk player and Wyoming product, “I am really enjoying playing with these guys. I think tonight was our best game playing as a team. We were moving the ball, passing and sharing, and we fought together as a team. And that helps me.”

“It was a great win for us against a good team,” he mentioned in his opening statement during the press conference following the narrow win versus Darussafaka, “Now we have to go play there. It was very good to start with a win at home in this series.”

“It was a big boost for us when we needed the energy they were there to give it to us,” McGee replied to a question about the support of the Burgos loyals despite COVID-19 rules limiting capacity to 50%. “It was a big advantage for us.”

The series is scheduled to continue next week in Turkey. Game 3, if necessary, will take place in Coliseum Burgos. The prevailing side will join Baxi Manresa, Tofas, and NutriBullet Treviso or Lavrio Megabolt in Group J of the Round of 16.

“I am very excited we will be playing in Egypt,” noted McGee previewing the approaching tournament, “It will be a nice place to play and compete.”

At the domestic level, Burgos currently 4-11 is ranked next-to-last in Spain’s ACB. Maldonado came in to replace Zan Tabak in November. The mastermind of the previous successful campaigns Joan Penarroya moved on to Valencia during the offseason.

Ranking second behind Rytas in Group H of the Champions League Regular Season forced Burgos to the Play-In Round instead of directly advancing to the Round of 16. A win in Game 2 or in potential Game 3 would rectify the situation.

“If a EuroLeague club comes calling, it would be the best decision they made” 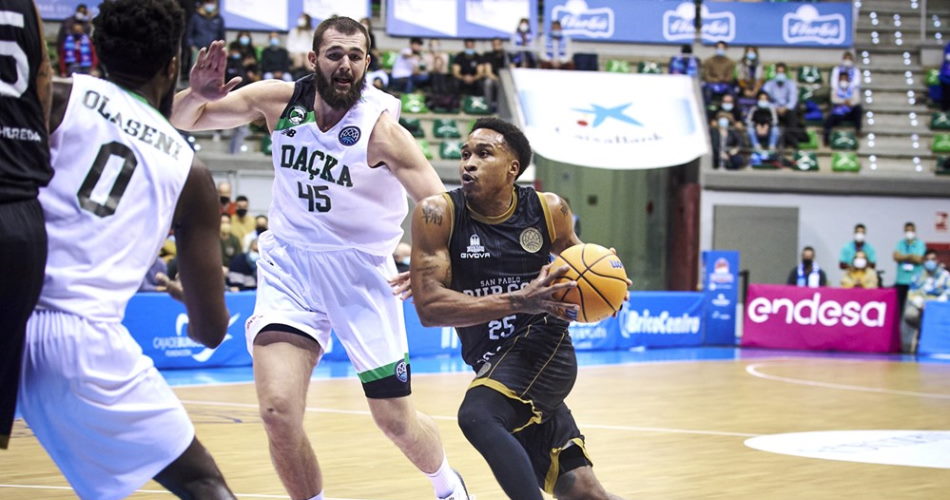 McGee, with plenty of experience all around Europe since coming out of Iowa State in 2013, has logged 13.7 points, 2.0 assists, 1.2 rebounds, and 0.8 steals per BCL contest, and 10.5 points, 2.1 assists, 1.7 rebounds, and 1.2 steals per ACB game. His solid showings have attracted the interest of multiple European teams looking to improve midway through the season.

“Everyone outside the NBA aspires to be a Euroleague player,” he told Eurohoops, “I’ve had offers from Euroleague clubs but the timing didn’t work out, unfortunately.”

Maccabi Playtika Tel Aviv has been rumored to be interested in his services.

“I know Maccabi well, I’m familiar with their coach and I’ve played with and against some of their players,” said McGee, “I respect them a lot and I think I can bring a lot of things they’re missing to the table.”

“In general, any Euroleague club that signs me will get 100% commitment and energy on both sides of the floor, not just the offensive side. My defense and hustle are contagious,” he added, “I’m happy and respect where I’m at right now, but if a Euroleague club comes calling, it would be the best decision they made.”