Stoiximan AegeanBall Festival is more than basketball, giving to its guests the opportunity to discover the beauty of its landscapes, the flavors of its rich gastronomy, the culture as well as the kindness and hospitality of Syros’ residents, on July 6-10, 2022.

More than 6,000 visitors, in 5 days, came by the event’s basketball courts in Miaouli Square, with the imposing view of the Ermoupolis’ Town Hall, serving as a reference point and background.

Sports tourism and the community of Syros came to prominence!

From the impressive squares and aristocratic mansions, the municipal buildings and picturesque chapels to the Orthodox and Catholic churches, museums, historical monuments, beaches, fairy-tale districts and traditional flavors, Syros was placed at the center of the world basketball map highlighting the island’s sports and culture. Stoiximan AegeanBall Festival filled the entire island with people of all ages, adults and children, amateurs and professional athletes, and above all with people who love sports. At the same time, the event highlighted the sports tourism of Syros, as it brought people and visitors to the hotels, who stayed on the island for at least five days for the event. 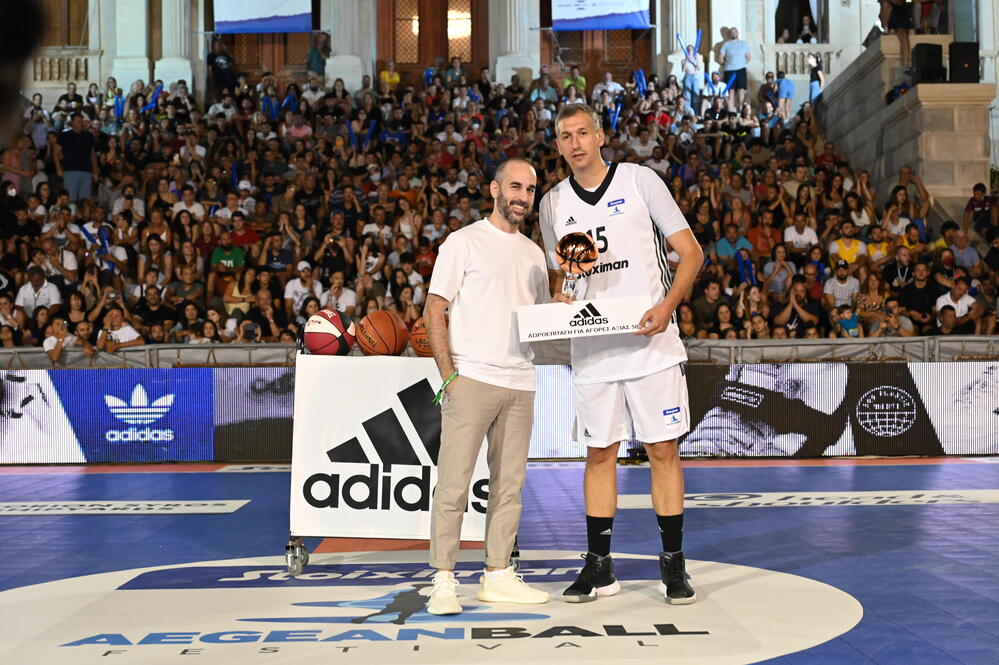 Stoiximan AegeanBall Festival 2022 made its historic come back. After three years, the vision of Georgios Printezis, turned Ermoupolis into the capital of basketball again and offered to the Children’s and Nursery Centers of Syros Hospital more than 20,000 euros.

In Miaouli Square, from the early morning until the evening, the sound of basketball echoed, giving a unique sports aura to the cosmopolitan capital of the Cyclades. More than 80 teams of all ages competed in all categories, creating beautiful stories, impressive talent and developing a passion for sports. The ELITE category, where professional athletes from all over Greece competed, stood out for another year. Its winners, four young teammates in the FEA New Philadelphia team, managed to lift the trophy and competed with Georgios Printezis and his prime guests in a panhellenic television broadcast!

Stoiximan AegeanBall Festival 2022 started its first night with the VIP League – the Championship of great Greek and European athletes, with the participation of Olympians and significant guests. On Saturday night, as soon as the moon appeared over Ano Syros, Ermoupolis welcomed its honorary guests.

Olympians and champions honored the event 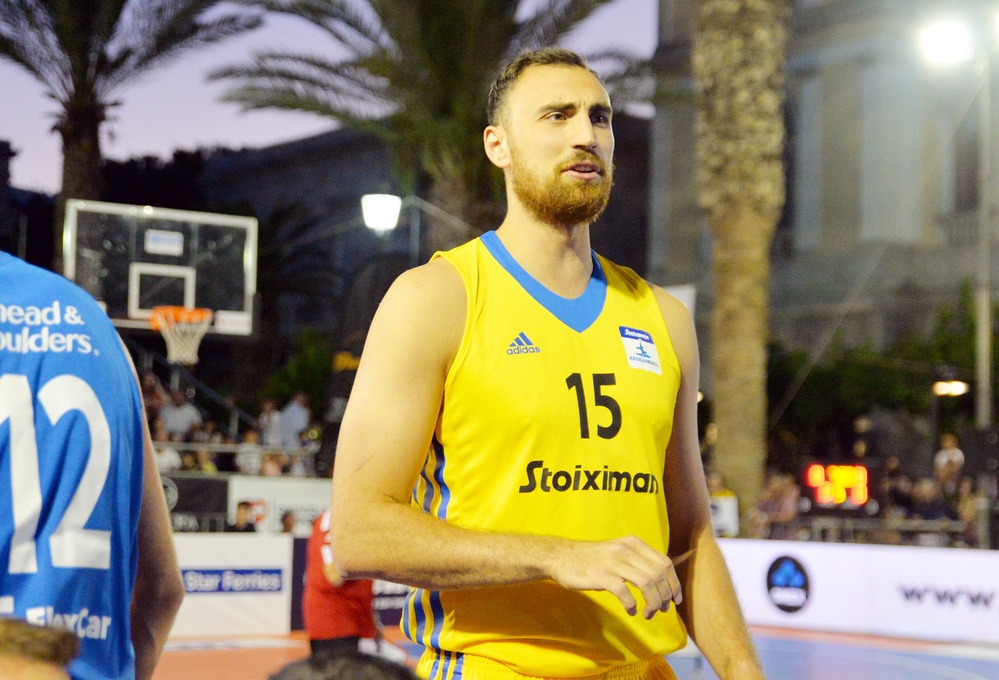 The most beautiful basketball show was written with great guest stars

The two-time European champion and MVP of the EuroLeague Final-4, Vasilije Micić, the EuroLeague Legends, Dimitris Diamantidis, Theodoros Papaloukas and Joe Arlauckas, one of the top centers in Europe, Nikola Milutinov, the European champion with the Greek National Team and the Real Madrid Giannis Bourousis, one of Europe’s top power forwards, Kostas Tsartsaris, this year’s top player of the Greek basketball league and member of EuroLeague’s top-5 players Sasha Vezenkov and Giorgos Papagiannis, member of this year’s top-5 players in the Greek basketball league, came to Syros for the All-Star Game of the VIP League!

Top athletes were present in Syros! 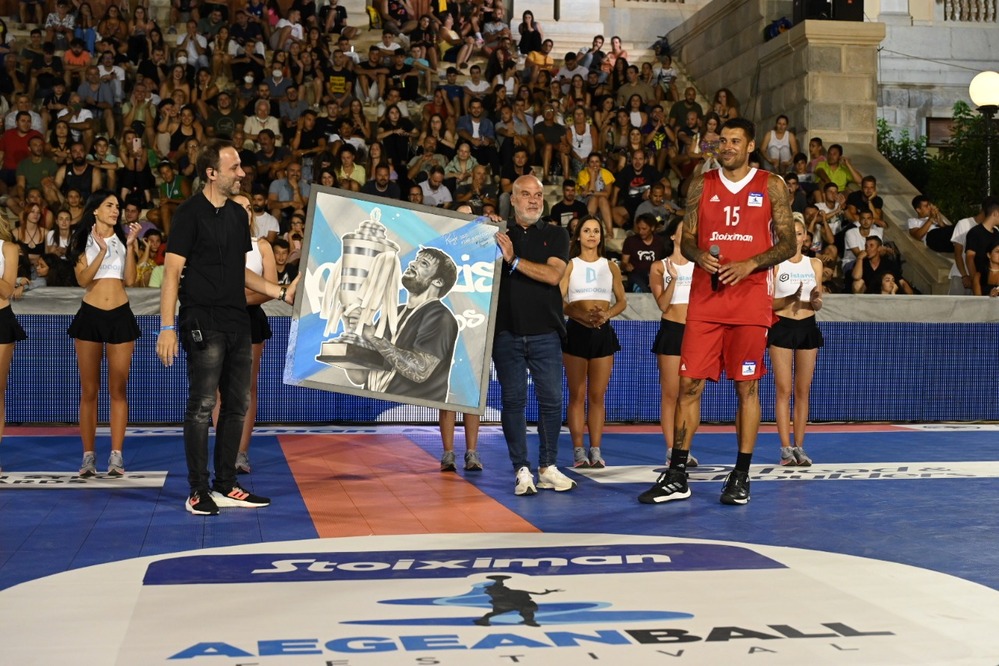 The completion of the groups’ first stage found the Head and Shoulders Rings of L. Petrounias, L. Chrysikopoulos, N. Gkikas, K. Sotiriou and the ELITE winners taking the lead and qualifying for the final. Moreover, the “Agorakia Lemarga” team proved to be very strong as they competed against top athletes. The Greek international basketball player with the Greek national team, N. Gkikas, made an excellent appearance and gave the victory to his teammates with an 11-10 score, winning the first big cup.

On Sunday, the FlexCar Lions were the main leaders in the grand final of the All-Star Game. G. Bourousis, G. Larentzakis, K. Chalikia and K. Papadakis won with an 19-11 score against the Stoiximan Warriors of G. Printezis, D. Diamantidis, E. Christinaki, V. Karahalios and the Stoiximan CEO, Mr. George Daskalakis and were applauded by the whole island. The 38-year-old Giannis Bourousis was named Flexcar MVP of the Stoiximan AegeanBall Festival 2022, with the great veteran and much-loved player winning the new award of the institution’s most valuable player, for the first time.

You may find here the Stoiximan AegeanBall Festival 2022 results.

At the same time, Georgios Printezis was awarded by the Mayor of Syros – Ermoupolis, Mr. Nikolaos Livadaras, with a laurel wreath plaque, symbolizing the high Olympic values ​​as well as, by the Cyclades Deputy Regional Governor, Mr. George Leontaritis and the Stoiximan CEO, Mr. George Daskalakis. The Stoiximan AegeanBall Festival initiator was also honored by the organizing company Progame, and its President, Mr. Fanis Xintavelonis as well as its CEO, Mr. Giannis Laskaris with a uniquely crafted painting. An honorary award was also given to Real Madrid’s legend, Joe Arlauckas, the oldest participant of the event at the age of 56, by the Cyclades Deputy Regional Governor, Mr. George Leontaritis.

A five-day event full of surprises, competitions and a lot of basketball was reserved for the event’s participants. The Blue Star Free Throw Contest started in the evening, with the participation of Olympians and champions, we couldn’t have imagined playing in Miaouli Square! The beloved presenter and journalist Maria Mpekatorou entered the court and competed, bringing smiles to the audience. She was joined by L. Petrounias, S. Ntouskos, S. Gianniotis and V. Millousi. Stefanos Ntouskos even made it to the final with Mr. Panos Konstantopoulos. Stoiximan’s Vice President almost did the ultimate play, winning the first competition of the day with 9 accurate shots, donating his prize to a charity organization.

The KOIS Long Shot Contest, by KOIS Optics in Syros, one of the most popular contests, had numerous competitors, but the last-minute entry was the best. The international athlete with the Greek national basketball team, K. Spatharou, scored from behind half-court and became the second in the history of the Stoiximan AegeanBall Festival to achieve this, after Kostas Papanikolaou.

After the first warm-up, the Gillette Half Court Contest followed. S. Fouraki and L. Chrysikopoulos were the only ones to score from the center of the court. The international athlete with the Greek National Team S. Fouraki, however, won against the Greek international Center in overtime, by scoring in three-pointers, and celebrated in front of a packed Miaouli Square!

The competition program started with ONEX Neorion Shipyards’ ONEX Skills Challenge. The Greek champion and cup winner with Olympiacos BC M. Lountzis impressed with his skills and won the competition. In the adidas Three Point Contest, however, the balance changed. Dimitris Diamantidis proved that the three-point shot is an art and, in fact, an art that is never forgotten!

Through the Stoiximan Shooting Stars competition, the ONEX Tigers, of N. Miloutinov, G. Athinaiou, D. Moraitis, S. Patera and M. Papagiannis, who scored from every part of the court, were the big winners. D. Moraitis won the Flexcar LayUp Under Pressure and showed that Printezis’ characteristic move, will continue to exist for many years to come. Head And Shoulders Shoot All Around completed the series of competitions, being inspired by those of the NBA. The international player of the Greek national team, C. Saloustros impressed with his shooting skill and celebrated by winning the trophy.

During the event, people were entertained by the IKEA Shoot & Win competition that gave the audience the opportunity to shoot from the spectators’ seats, to score and win rich gift vouchers by IKEA, while an outstanding tone and pulse was offered by the cheerleaders Red Drops by Windoor & Island Packaging, throughout the Stoiximan AegeanBall Festival.

Top companies on the side of Stoiximan AegeanBall Festival 2022

The event was held thanks to the valuable support of significant companies from Greece and abroad, and thanks them for their precious contribution.

Stoiximan was the Name Sponsor of this year’s event.

In the event’s Fan Zone area, sponsors participated in the celebration with their own stands and special activations, with Human Tecar offering necessary physical therapy and rehabilitation services to all athletes.

The event returned and was held for the fourth time in what was envisioned as a sports-tourism celebration for children and parents, athletes and fans for Syros (#WeAreSyros).

You may watch here some of this year’s event highlights.

Stoiximan AegeanBall Festival 2022 was organized by Progame, the Municipality of Syros – Ermoupolis and the Region of South Aegean.