With Europeans taking over the NBA, there’s the flip side of the story. Immigrants from Europe who were the pioneers of the sport and help their own countries in their own way to develop the game. That’s the story of Nick Lambros

“Do you know that Nick Galis was supposed to come to my college?” When you hear that in a conversation you know you have a story.

Even before becoming a Hall of Famer, Nick Galis was a legend in Europe, and before that, he was a high school legend in the New York basketball scene. However, he is not the only son of immigrants to the US who made his life thanks to basketball.

Nick Lambros is a legend himself at Hartwick College in Oneonta, New York, graduating in 1959 and remaining active until now as a volunteer assistant coach. He is a member of the Hartwick “Hall of Fame”, his name is associated with the basketball team for more than six decades, and as happened with many Europeans who found themselves in the States, he helped on his own way to the rise of the sport in their home country.

“I came to Greece in 1983, I was invited to Thessaloniki by Ted Rodopoulos for a basketball camp“, Lambros explains. “I returned to 1985, I enjoyed it immensely. I was very impressed at the time. Ted had a great basketball camp and I know that he was not the only one, but he was one of the guys who started this trend. It was very organized and I was very lucky to work with some people. One of them was (ed. note: Greek legendary center) Panagiotis Fassoulas and also Lakis Tsavas, Dean Georgiadis”.

“Well, my mother and father are from Sparta, so, I consider myself a Spartan“, coach Lambros said to Eurohoops. “They were from a small village outside Sparta. My father came to the States in 1911 and my mother a bit later. We are the first generation. I have been to Greece many times”.

Growing up in the 1950s in the States, Lambros played also baseball and sports has been not only an outlet for him but also a good professional choice: “It was kind of natural to play baseball. And also kids when they go to the basketball court they like it and then they play every day. I was good at both. My father was working at a restaurant, and my mother stayed at home but that’s how I got into athletics and eventually into coaching. When I got to the collegiate level, I said I want to do this for a living and that’s how I ended up in coaching”.

Hartwick was part of the NCAA second division at the time and had a pretty good track record and reputation, in an age when the whole division had much more prestige than today. And that’s how Galis entered the picture, with Lambros due to his Greek origin being the man who was in contact with him: “When he was in high school in Union New Jersey, we recruited him. He liked our college very much and in fact, he was enrolled to play. I was the assistant coach at the time. In September of 1975, he was enrolled and I was looking for him in the dorms. And he was not here. We finally called him and he said: “Coach I am sorry, I decided to go to Seaton Hall”. We were Division 2, and he liked it, he had a good friend from Jersey here and he would stay in the same room with him”.

Lambros met Galis again in a very different setting: “It was very funny, because when later I came to Greece and met the national team in the “John’s hotel” in Glyfada and I said: “Where’s Nikos?” He was having breakfast and I go over to Galis and I told him: “What the heck you are doing here? You were supposed to come to Hartwick college”. He looked at me surprised, then he recognized me. “Oh, my God, coach how are you?” Boy, if we had him, we could have been national champions”. 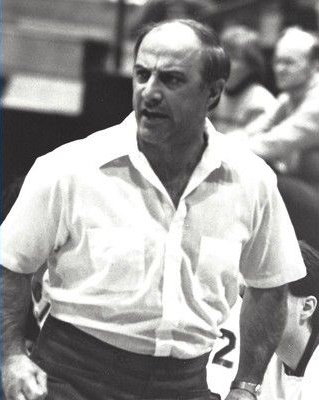 Lambros doesn’t hold a grudge. In fact, he loves Galis and Greek basketball, but his favorite is coach Giannis Sfairopoulos, whom he met during the 90s: “He is the best! He came to our basketball camp and he took everything from me, all the information I had in those years. He wanted to learn everything he could”.

At the same time, Lambros is a good friend of Syracuse legend Jim Boeheim – “I am a better golfer”, he says laughing and probably he is right since there’s a charity golfing tournament named after him at his college – and he can’t stay away from the game: “I am a basketball lifer. I love the game, I watch the games, and tomorrow I will go to a Syracuse practice. I don’t like the way the American game is played so much, with all the three-pointers, just two or three passes and then shoot. I know that’s how the game has evolved and I still love it. And the EuroLeague develops a lot of good players, they can shoot man! Look at the guys who are playing in the NBA from Europe and many of those are great! And I want to see the Greeks improve again. They were awfully good for a while and I don’t know what happened to Greek basketball, but it doesn’t seem to be on the level it was 10 years ago. When I was there in the 90s and 2000s the level was amazing. So why had the level of basketball gone down a little?”

And if you are wondering where coach Sfairopoulos got his defensive DNA, this answer by coach Lambros might give you a hint: “I do like the three-point shooting, but I also would love to say plays developed. If you see basketball right now, there are two guys in the corners, there are high ball screens and that’s it basically, three on three at the top. You just drive and shoot. I was a big defensive guy, I liked to change defenses and I will continue to do it, to take away all that stuff. My team right now would be a changing defense, changing speeds, and controlling the game, but that’s just me! I am sorry”.

On the other hand, coach Lambros recognized the fact that he might not be well equipped to judge the FIBA rule and if it’s right on wrong, despite his wish: “That’s their own rules, it would depend on the country, so I can’t answer that question. If I could use more, of course, I would but I don’t know what others do. I don’t know what Spain does, I don’t know what Serbia does”.

After all, with basketball being global, there’s a growing number of European players of top level and as Lambros says, playing in the NBA is everything you need to know about their progress: “I got to agree that European players are better at fundamentals, but the raw physicality that Americans have is different. You might have all the fundamentals here, but you get beat up here. They have to learn to adjust to that. But anybody who plays in the NBA is a great player, so if you are a European playing in the NBA, you are a great player”.