Examining the best offensive pairings EuroLeague has to offer.

Turkish Airlines EuroLeague with the help of Synergy Sports Technology presents the Round 23 and 24 Stats Review. The theme for this week is the best passer-scorer combinations of Europe’s premier club competition. The statistical analysis includes the aftermath of the double-game week and upcoming action as well.

Per EuroLeague: “Round 23 featured one of the best games of the season from a statistical perspective while Round 24 included one of the very strangest in recent memory.

In one of the can’t-miss games of the EuroLeague regular season, CSKA Moscow welcomed Anadolu Efes Istanbul to Megasport Arena in a rematch of the 2019-20 Turkish Airlines EuroLeague Championship Game. Last spring, CSKA got the best of Efes, 91-83, to secure its second championship in four seasons. This time, Efes showed its growth from last season by securing a hard-fought 82-80 win in what may turn out to be a 2020 Final Four preview.

In just his second game back from injury, Vasilije Micic was the difference for Efes. He shook off the rust he showed in his return a week prior to score 19 points over just 14 possessions while dishing out 5 assists. Following that up with a 22-point performance on just 16 possessions in a win over Zalgiris Kaunas two days later, Micic had one of the best double-round weeks of anyone. That’s saying a lot, especially considering he played his first game since early January in Round 22. The rich get richer as the EuroLeague’s best offensive team gets even stronger with Micic returning to form.”

The extreme contrast between the play of these two teams in a game decided by just 6 points is even apparent down to the fine details. Madrid scored 66 points over just 35 possessions with the lineup of Anthony Randolph, Facundo Campazzo, Jaycee Carrol, Walter Tavares, and Jeffery Taylor on the floor while ALBA used 20 lineup combinations, none of which scored more than 13 points. Facundo Campazzo tied the EuroLeague record by recording 19 assists as Madrid generated 33 points with passes out of the pick-and-roll to just 10 for ALBA, for whom Luke Sikma dished out a team-best 8 assists from the post. Madrid’s ball handlers, however, scored only 9 points out of ball-screen actions compared to ALBA’s 22. It was a rollercoaster ride for both teams in Mercedes-Benz Arena.

In Campazzo’s 19-assist performance, he dished 8 assists to Anthony Randolph alone. There are plenty of potent offensive tandems in the EuroLeague, but some point guards, whether by design for by playing style, develop a truly special chemistry with certain teammates.” 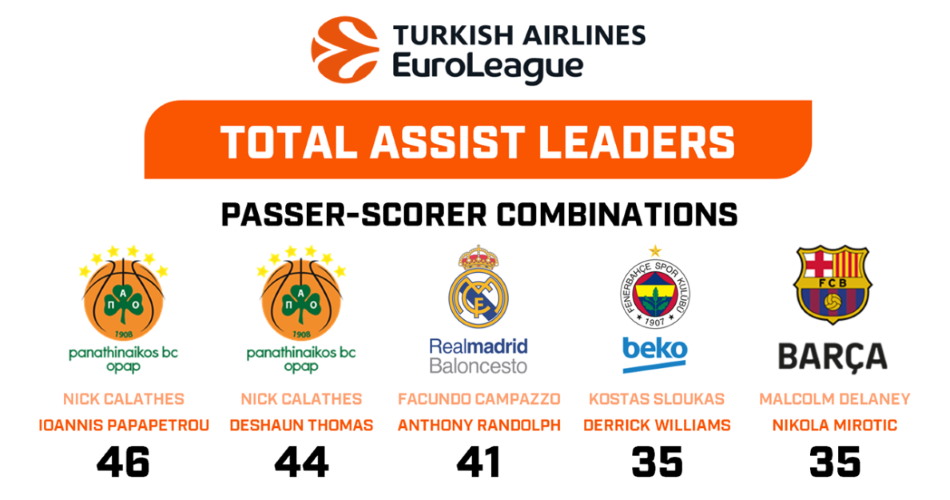 Read the rest of “Round 23 and 24: Favorite assist targets” on EuroLeague.net.