Huertas, Benite, Hruban, Thomas and Chassang make the BCL Team of the Round of 16

It was a pretty long Basketball Champions League Round of 16, still produces solid top five.

The Basketball Champions League Round of 16 started last March and was completed Wednesday evening. The coronavirus pandemic forced a pause on the action but FIBA’s premier club competition is back and planning to finish the 2019-20 season with a Final Eight scheduled to start September 30 in Athens.

Between all Round of 16 games played, Marcelinho Huertas, Vitor Benite, Vojtech Hruban, TaShawn Thomas, and Alexandre Chassang landed in the Team of the Round of 16, BCL announced Thursday. 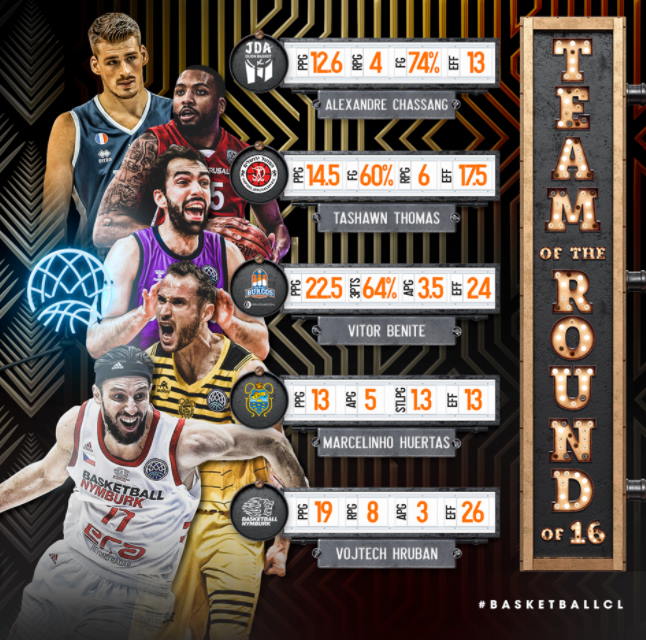 That very fact is the best testament to the professionalism and dedication of every player that was involved in this extraordinary process. So, in a way, every one of those players deserves recognition for pulling off this feat, although there is only room for five of them on The Team of the Round of 16.

Marcelinho Huertas, Vitor Benite, Vojtech Hruban, TaShawn Thomas and Alexandre Chassang make up the 2019-20 Team of the Round of 16. Let’s have a closer look at each one’s accomplishments:

Tenerife’s offense goes as Huertas goes so it’s not a surprise that the Spanish side won Game 1 and Game 3 against Filou Oostende, in which the Brazilian star had his two best games of the series.

In Wednesday night’s tiebreaker, when the ball seemed to be very reluctant to go through the hoop, Huertas was the only Tenerife player to score in double digits as he had 13 points and led his team to a 62-52 win that earned them a ticket to the Final 8.

He was in his usual sublime form in Game 1 back in March, also at home, when he posted a double-double of 19 points and 10 rebounds and added a BCL career-high 6 rebounds.

The second Brazilian international on Team of the Round of 16 also plays for a Spanish team, but his path to earning this spot was much shorter as Benite led Burgos to a 2-0 sweep of Dinamo Sassari in March.

Benite drilled 7 triples on 10 attempts and went off for 30 points in the pivotal Game 1 at Sassari, propelling his team to an 84-81 victory. Even in the most prolonged play-off series in history, no player managed to score more than Benite’s 30 or hit as many as 7 threes or reach his efficiency rating of 32 in that game.

Burgos didn’t waste the chance to finish off the series at home as they clinched a 95-80 win in Game 2, as Benite had 15 points and 4 assists for a PER of 16.

Vojtech Hruban made it rain for @basketnymburk: 19PPG & 70% from the field, the highest percentage during the #BasketballCL Round of 16! 💪 pic.twitter.com/FbbcLOrOQM

One of the main difficulties of a play-off series is delivering consistent performances game in, game out, but apparently nobody told Vojtech Hruban, because he came up with two almost identical contributions to lift Nymburk over Bandirma in just two games.

The Czech international scored 19 points in Game 1 at home on 7 of 11 shooting from the floor, adding 9 rebounds for a near double-double.

In Game 2 in Turkey Hruban got 19 points again, only this time around on 7 of 9 shooting, and added 7 rebounds and 4 assists for an efficiency rating of 28.

Jerusalem took care of business against Peristeri winmasters in just two games and the series was also business as usual for Thomas, who just did more of what he had been doing throughout the Regular Season – a little bit of everything on the floor.

Game 2 in Greece was a more challenging test for Jerusalem but Thomas stayed on the court for nearly 32 minutes and the full extent of his influence on the game is not reflected in the statline, albeit he still collected 13 points, 5 boards and 2 assists as the Israeli team sealed a 79-73 win.

It’s difficult to find your shooting rhythm early in the season and the uncharacteristically low field goal percentages in both of Wednesday’s Game 3 clashes are proof of that, but Chassang demonstrated that it’s never too early to strive for perfection.

The French big man went an almost flawless 8 for 9 from the floor to get 20 points in Game 3 and it’s not an overstatement to say that his shooting kept Dijon afloat during a first half mired by turnovers, and ultimately propelled them to a crucial 75-67 win in the tiebreaker.

Chassang had exhibited a similar shooting prowess in Game 1, which Dijon won 88-73, as he went 7 of 8 from the floor and brought down a game-high 7 rebounds to go with his 14 points on the night.”