After two Basketball Champions League seasons with Anwil Wloclawek, well-traveled Chase Simon ended his second stint with the Polish club and joined JDA Dijon. He helped the French club advance to the Final Eight scheduled to commence October 31 in Athens and sharing the stage with Alexandre Chassang talked to Eurohoops about playing in the concluding tournament of the 2019-20 season.

“That was a great test in terms of physicality and rhythm,” Simon replied confirming the significance of facing Nizhny Novgorod, “We understood how much better we have to be. We have a lot of work before our next opponent but we have another great opportunity in the French league to play a EuroLeague team, ASVEL, before Turk Telekom. It’s always better to make adjustments after a win.”

“It was a win-or-go-home game similar to what will we face in Athens,” supplemented teammate Chassang who registered 20 points, three rebounds, and one assist in the Round of 16 Game 3 contest played several months after its original scheduling, “For sure it was a solid test for us, but I don’t really think it will generate an advantage for us compared to the other Final Eight participants.”

Officially debuting for Dijon, the Detroit-born effective swingman in Simon was also among the main offensive contributors with 11 points to his name. The reinforced French outlet finally turned the strong outings prior to the hiatus due to the coronavirus pandemic to a Final Eight berth.

“I am happier about the win and a chance to play at the stage in Athens than my debut,” explained Simon, “I am happy to be a part of this journey with Dijon.”

“I wasn’t satisfied as much with my performance because I know my level,” he added, “I felt that I got tired as the game went on. I was the last player here and in Detroit, the gyms were very late to open, so my shape is still coming along. The best is yet to come and I am excited to compete for a BCL championship with my teammates.”

Being among the newcomers alongside Hans Vanwjin and high-flyer Jaron Johnson, Simon gets head coach Laurent Legname. Despite the movements forming the 2020-21 squad for La Jeanne, David Holston will again be leading the pack, while Axel Julien and Chassang highlight the domestic portion of the roster.

“This is the sixth season in Dijon for both David and Axel, under the same head coach,” pointed out Chassang who himself is up and running in his third season after previous pro stints with Hyeres-Toulon and ASVEL, “They are playing their best basketball and are the heart of the team, the leaders and our playmakers. But for sure, like every year in Dijon, you have to count on all the team because every player is dangerous and can be a weapon for us.”

“This team is special,” the 26-year-old French big told Eurohoops referring to extending his contract up the conclusion of the 2021-22 season last May, “The last three years I have been playing under the same coach and point guards. It helps a lot. We practice hard and the staff is dedicated to making us better. Everybody trusts me and my qualities, and that’s good for me because I needed that faith to make a step in my career. Now I have to validate that trust constantly performing in every game.” 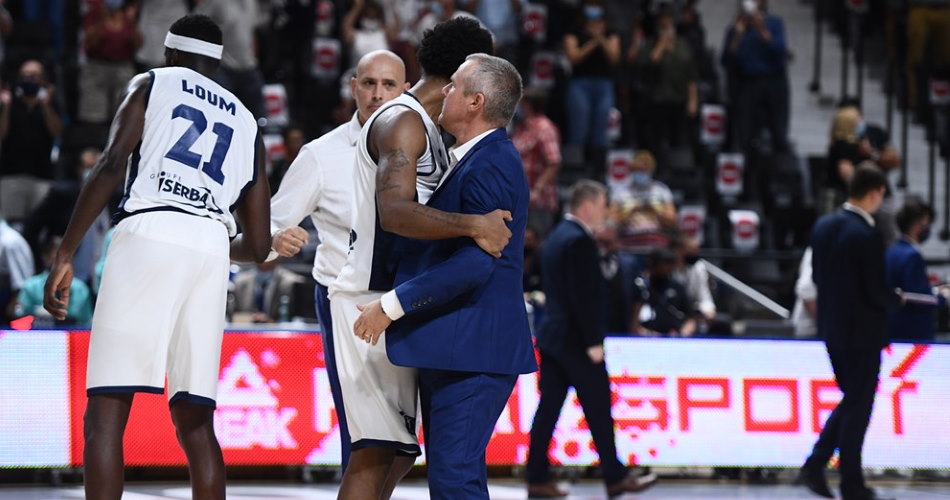 “He is aggressive with his defensive schemes and strategy,” noted Simon regarding Legname, “I had similar responsibilities at Anwil but I used to guard and disrupt all the point guards. Offensively, I am involved in more decision-making and creating, which I’m used to and is fine. It’s more of a free-flowing offensive with continuity and I have a good feel for it. I am used to a lot of this offense because we used the bigs the same way in Anwil, so it wasn’t too much to adjust.”

“We will definitely be smaller but that can be a strength as well,” mentioned Chassang commenting on the 2020-21 squad, “We have to play retaining our identity, including solid defense, fast offense, and our passing game. Hans and Chase will fit perfectly.”

Apart from the October 30 quarterfinal opposite to Turk Telekom, Dijon will move on to the 2020-21 season among the teams guaranteed a spot in the Regular Season. A fresh start with a brand new season accompanied by a tough challenge of matching or maybe surpassing the already impressive 2019-20 run.

“We will have the same mindset as the last years to be aggressive on both ends of the court. To have a good spirit and play smart,” remarked Simon, “That will ensure success at some level. How well we execute and make habits of this behavior will determine our level of success this year.”

The accepted unique stature of the 2020-21 season can force players to the sidelines or even games being postponed. The Basketball Champions League adjusted the competition format to better suit circumstances.

“It is a special situation so of course, it will be a special season,” confessed Chassang, “We just want to play as many games as possible. Everybody pays attention to the sanitary instructions and we will see what happens.”

“We expect differences only with things we can’t control with the COVID-19 maybe canceling games or keeping players out of important games,” added Simon, “We will try to have the same if not better success than last year’s team and they set the bar pretty high!”.