How to turn a nightmare into a great (hi)story: Real Madrid edition

You’re allowed to fall, but you have to get back up again. How you get back up is what separates the great teams from the others. Real Madrid belongs in this category. Eurohoops explains.

Coming into the final round of the regular season, Madrid was among the top four teams in the standings like it had been in 19 of the previous 28 rounds, oscillating between fourth place and the top spot. In fact, Los Blancos had not found themselves below eighth place all season long. When the opening tip went up in Round 30, Madrid was in fourth place. And by the final buzzer, it was fifth. 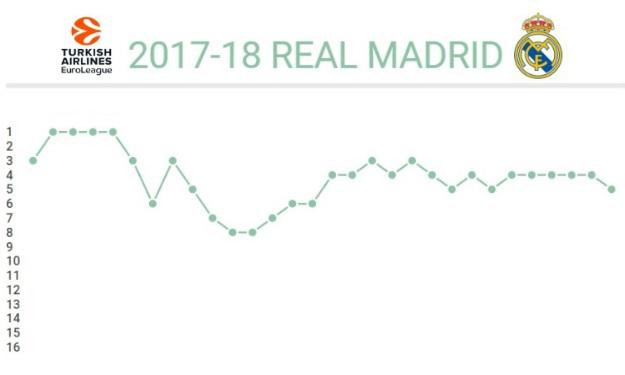 What was at stake was home-court advantage for the playoffs. After battling to achieve that for six long months, Madrid learned it had missed its goal. The mission from that point onward? To take back what Panathinaikos Athens – which leapfrogged Madrid for the fourth spot – had taken from them. Even without the home-court advantage.

The postseason opener was catastrophic. Madrid did not score a single point in the game’s first five minutes, trailed by as many as 35 at one point and eventually lost 95-67. What most smarted in the locker room was not the defeat itself, after all, the series was best-of-five. It was that Madrid surrendered without a fight. The image of the humiliation that didn’t match the weight, the history and quality of the team that Madrid represented.

How do you come back after a game like that, after that kind of performance, against Panathinaikos at the Olympic Sports Center in Athens, without Sergio Llull or Facundo Campazzo? The answer came in less than 48 hours: Immediate reaction! First mentally and then physically, but also competitively. The final score was 82-89, with a lot of players stepping up and Felipe Reyes signing off on a 1-1 series tie.

“Sometimes basketball is as easy as it is difficult. Not a lot of things can change in two days. Our performance the other day was not good. We felt we weren’t ready. There is a Greek man who has a small store next to our hotel and he told us ‘You chickened out. Didn’t you want to win?’ It was unpleasant, but it was good for us. We played with more courage this time,” the team’s coach, Pablo Laso, explained after the game.

And after that? With Lull back in action after an eight and a half-month long recovery from knee surgery, the 1-1 was turned into 3-1 with a pair of Madrid victories at WiZink Center. Advancing to the Final Four led to a return to the top of Europe by knocking out the last two European champions (CSKA Moscow and Fenerbahce Istanbul, in that order) with dominating basketball.

Madrid has picked up where it left off last season. Los Blancos are still undefeated (alongside CSKA) after the five rounds. Including the five wins to close out last season, Madrid is on a streak of 10 consecutive victories.

This is the second-longest winning streak in the EuroLeague in club history after 13 wins in a row from October 2013 to January 2014.

Just as impressive as the way Madrid bounced back was how that carried over to the new season. Without Luka Doncic, but with Llull present from the beginning this time, and the rest of their core having remained intact (13 players back from last season), Madrid has the league’s best offense and second-best defense.

If there is a perfect way to turn a difficult night, a crushing defeat, a basketball shock and a nightmare into a brilliant (hi)story, Madrid, after last season, knows how to pull it off. How many people remember today what happened on the night of April 17 at Olympic Sports Center Athens?

Laso and his players definitely do. All of them came out of that experience stronger, they made history and proved that what doesn’t kill you makes you stronger. Just as long as you continue to believe and to fight!