Krunoslav Simon: “I hope we will put the crown on these 3 years”

After making one of the biggest shots of the season and helping Anadolu Efes to qualify over Real Madrid, Krunoslav Simon and his team are still on a mission. Efes has produced during the last three years some of the best basketball ever seen in Europe, but in order for this to have a seal of approval, they must also win the EuroLeague.

The Croatian forward will once again take part in the Turkish Airlines EuroLeague Final with Anadolu Efes form and before that, the veteran star talked to Eurohoops about the current season, his wish to wrap up Efes‘ fantastic course with a EuroLeague title in Cologne, the playoffs series against Real and his plans for the near future.

First of all, I would like to ask you about your shot in Game 5 of the Real Madrid series. It was like a movie scene. What did you feel at that moment? Did you wait for the ball to go in?

– (Laughs.) Of course, when you are a shooter you always need to expect that you will make the shot. Of course, it was a great moment. It was a big three for me. It was a tough situation. There were 3 seconds left and it would be to our advantage anyway. I had to throw it out anyway. If I didn’t throw, we had no chance to find anything. It was great for both me and the team.

– Did you see Trey Thompkins in front of him or did you only see the basket?

– No, I saw him. He said when I released the ball “no way!”. I said let’s wait two more seconds and see. He was shocked too.

– Chris Singleton played brilliantly in that game. Do you want to say something about his performance? How was the mood before the match? Did you expect it to be such a factor?

– We are all aware of how good a player he is. We practice with him every day. It was not a big surprise for us. Of course, at that moment, he played a big game at that level. He played amazing, but it didn’t surprise us much. He’s a top player. We are happy to have him on the team.

– Before coming to Anadolu Efes, did you expect this organization to become such a powerhouse in Europe? Because you have been dominating Europe for years now and we can say that you are one of Europe’s great.

– It is hard to expect things like this because this club has always been a big club and before I came here I heard from everyone that it was an amazing club, but there was never a team to go three years in a row to be in the top. That’s a great thing, of course. For all of us, for the club.  I hope we will put the crown on these 3 years. 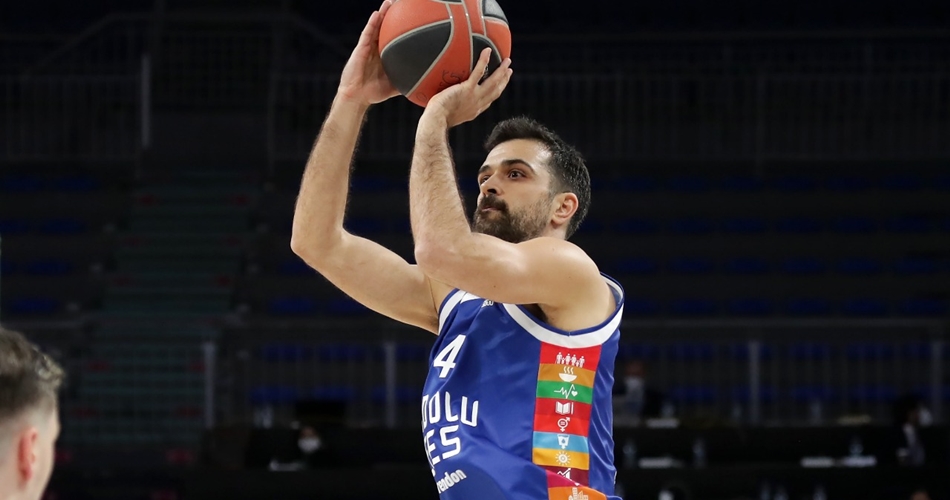 – Last year you dominated the EuroLeague. You were at the top of the regular season and seemed to be the championship contender, but then unfortunately the season got canceled. When we talked to Bryant Dunston he said, “I feel like someone stole something from us”. Do you feel the same?

– No, to be honest, I might disagree with Bryant and everyone who says this. I hear that sentence a lot lately. Of course, it was not easy for us because we were playing great and we all thought it was the season that we can do it, but even if we were in the first place and played great, Final Four is a completely different situation. You play two matches in three days and you can always lose one match against anybody. A new situation has arisen with the virus. Especially people with children were more afraid. Canceling everything was not an easy call. But we must understand this and live with it. Now we have a new chance and I hope we can take this chance. I don’t think much about last season.

– It is one of the most difficult seasons for everyone due to COVID. Especially for you, you have to travel a lot and spend time in hotels when traveling. How is this season going for you? How do you deal with these difficulties?

– At the beginning, we were all afraid of how to do these things. We didn’t know whether we would play or not, we were worried if everything would go well, but when everything started, when we started to do it, everything is great. The matches are great, the whole league is great. The organization is excellent. We got used to it, and as I said most importantly, we are playing. This is the most important. Of course, we are sad that we played 90% of the games in empty gyms but we have to accept that. As I said, I am quite surprised by how things are looking.

– I also want to ask about the Real Madrid series. You started off very well, you got two easy and different wins. Later, Real Madrid bounced back. Did you expect such a comeback?

– Honestly, I didn’t expect that because the first two games were much easier than I expected. We were very superior in the first game in Madrid, we almost won the match. There was a difference of about 15 points with five minutes remaining. No one expected them to come back, but as I said before, these are great teams. Big teams are doing great things like this. So you can never play easily with them until the last second. They made an incredible comeback and put us in a very difficult position in Game 5. I am very happy that we showed the right reaction.

– You will face CSKA Moscow in the first match of the Final Four. It’s a very tough team. What would you like to say about this match?

– Yes, a very tough and experienced team. A team that plays in the Final Four every year. Of course, it will not be easy. They have a great roster, great players. It’s 50%-50% but we have our chances and we expect that we will play well and win the game.

– It’s great for me. This is my fourth year here. You can see that I enjoy every moment on TV. I enjoy every moment on the court. I always say the same thing, it gives the players a chance for creativity. He gives players confidence. It’s much easier for us to play when you have such a coach. I think this is our biggest strength. We have many players, ball handlers who are very good individually in this team. So we can all create something extra. I always say this. I love this the most.

– He also makes bold statements and that’s why the press loves him. He always makes headline statements. And you? Do you love him in this sense? Do these statements give you extra motivation?

– Let me tell you one, he said recently that he knew that Anadolu Efes will be the EuroLeague champion this season. Do you agree with this?

– I can’t agree. Of course it’s good that he has such this kind of confidence, it shows that he trusts his players. This is great for us as well, but we all realize that no one will give us anything. We need to play hard as we have done so far and of course have a little bit of luck is needed. I hope we will be the winner in the end.

– Of course, considering the results of the team, the three years I spent here was also great for me because I am a player who always wanted to do something for the team and that is the most important for me. I am aware this is a great season and I am enjoying it. I just hope to be able to continue this performance for another month because that’s the key to the season. Everything will be clear in those two games.

– There is also an option in your contract. What are your future plans with Anadolu Efes? Sure it’s too early to ask, but would you like to stay here for many more years?

– Everything depends on the club. Whatever they decide I will live with that. Of course, I want to stay. I feel great here. This is my fourth year in Istanbul. My kids go to school here. We enjoy living here with my wife. Of course, I would be glad to stay but everything is on the club.